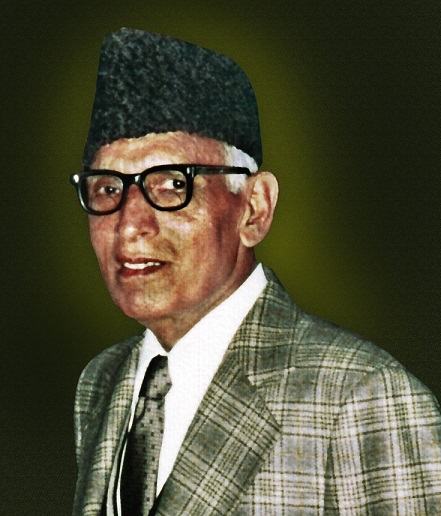 Mehr Lal Soni (9 February 1913 – 19 August 1986), better known as Zia Fatehabadi, was an Indian Urdu ghazal and nazm writer. He was a disciple (shaagird) of Syed Aashiq Hussain Siddiqui Seemab Akbarabadi (1882–1951), who was a disciple of Nawab Mirza Khan Daagh Dehlvi (1831-1905). He used the takhallus (nom de plume) of Zia meaning "Light" on the suggestion of his teacher, Ghulaam Qadir Farkh Amritsari.

Zia Fatehabadi began to write poetry in 1925 under the supervision of his mother, Shankari Devi, with the help of Maulvi Asghar Ali Haya Jaipuri, who used to teach him Urdu at home and who also imparted his own knowledge of Urdu poetry composition to him. By 1929, Zia Fatehabadi had become a familiar name in Urdu literary circles. In 1930, he became Seemab Akbarabadi’s disciple and remained true to his ustad until his own death, working to spread Seemab's methods and instructions at all times. He never ever gave a moment's thought to his own name or fame and sought neither favours or honours nor public or state recognition. He categorically rejected such exercises. He believed that the real worth of a poet's creativity can, ultimately, be gauged impartially only by those who look deeper into his works, in their desire or eagerness to get to know the poet better.

In 1933, at the age of 20 and while still a college student, Zia Fatehabadi succeeded in having his very first collection of Urdu poems, Tullu (Dawn), published in Meerut by Saghar Nizami. He wrote from the heart and, efficaciously, dressed his feelings, emotions, thoughts and experiences with simple, delicate, sweet-sounding, lyrical, meaningful, easily understood words and phrases – the key features in his poetry. His inimitable style set him apart from his peers and gave him a distinct identity.

His writings were meant to touch one's heart and mind simultaneously and make one feel all that he himself had felt. He was totally at ease in the use of a variety of prose and poetical formats. However, he did not succumb to the practice of uninhibited expression of ideas in open forms, which had been adopted by some of his noted contemporaries, who had introduced symbolism in Urdu Poetry. In his article titled Zia Saheb, Gopichand Narang had said that he (Zia) belonged to the Seemab Akbarabadi's circle of devoted writers; deep knowledge of the etiquette and effective use of language and expression, the immense richness of feelings and emotions meant to be conveyed, and the fine eloquence and methodology adorned his writings and he makes use of Hindi intonation in ghazal quite effectively and also quite meaningfully highlights the contemporary human pain and suffering; to appraise Zia Fatehabadi is to appraise the inherited tradition and refinement of our poetry. In his compositions, that demonstrate undefiled immaculate thought and brevity Zia Fatehabadi has revealed new and factual aspects of thought and insight.