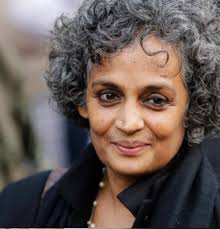 Suzanna Arundhati Roy (born 24 November 1961) is an Indian author best known for her novel The God of Small Things (1997), which won the Man Booker Prize for Fiction in 1997 and became the best-selling book by a non-expatriate Indian author. She is also a political activist involved in human rights and environmental causes.

Early life
Arundhati Roy was born in Shillong, Meghalaya, India, to Mary Roy, a Malayali Syrian Christian women's rights activist from Kerala and Rajib Roy, a Bengali Hindu tea plantation manager from Calcutta. When she was two, her parents divorced and she returned to Kerala with her mother and brother. For a time, the family lived with Roy's maternal grandfather in Ooty, Tamil Nadu. When she was five, the family moved back to Kerala, where her mother started a school.

Roy attended school at Corpus Christi, Kottayam, followed by the Lawrence School, Lovedale, in Nilgiris, Tamil Nadu. She then studied architecture at the School of Planning and Architecture, Delhi, where she met architect Gerard da Cunha. The two lived together in Delhi, and then Goa, before they separated.

Personal life
Roy returned to Delhi, where she obtained a position with the National Institute of Urban Affairs. In 1984, she met independent filmmaker Pradip Krishen, who offered her a role as a goatherd in his award-winning movie Massey Sahib. Later, the two married. They collaborated on a television series on India's independence movement and on two films, Annie and Electric Moon. Disenchanted with the film world, Roy did various jobs, including running aerobics classes. Roy and Krishen eventually separated. She became financially secure with the success of her novel The God of Small Things, published in 1997.

Roy is a cousin of prominent media personality Prannoy Roy, the head of the leading Indian television media group NDTV.. She lives in Delhi.

Career
Early career: screenplays
Early in her career, Roy worked for television and movies. She wrote the screenplays for In Which Annie Gives It Those Ones (1989), a movie based on her experiences as a student of architecture, in which she also appeared as a performer, and Electric Moon (1992). Both were directed by her husband, Pradip Krishen, during their marriage. Roy won the National Film Award for Best Screenplay in 1988 for In Which Annie Gives It Those Ones. She attracted attention in 1994 when she criticised Shekhar Kapur's film Bandit Queen, which was based on the life of Phoolan Devi. In her film review titled "The Great Indian Rape Trick", she questioned the right to "restage the rape of a living woman without her permission", and charged Kapur with exploiting Devi and misrepresenting both her life and its meaning..

The publication of The God of Small Things catapulted Roy to international fame. It received the 1997 Booker Prize for Fiction and was listed as one of The New York Times Notable Books of the Year.[14] It reached fourth position on The New York Times Bestsellers list for Independent Fiction. From the beginning, the book was also a commercial success: Roy received half a million pounds as an advance. It was published in May, and the book had been sold in 18 countries by the end of June.

The God of Small Things received stellar reviews in major American newspapers such as The New York Times (a "dazzling first novel," "extraordinary", "at once so morally strenuous and so imaginatively supple") and the Los Angeles Times ("a novel of poignancy and considerable sweep"), and in Canadian publications such as the Toronto Star ("a lush, magical novel"[19]). It was one of the five best books of 1997 according to Time. Critical response in the United Kingdom was less positive, and the awarding of the Booker Prize caused controversy; Carmen Callil, a 1996 Booker Prize judge, called the novel "execrable", and The Guardian called the context "profoundly depressing". In India, the book was criticised especially for its unrestrained description of sexuality by E. K. Nayanar, then Chief Minister of Roy's home state Kerala, where she had to answer charges of obscenity.

Later career
Since the success of her novel, Roy has written a television serial, The Banyan Tree, and the documentary DAM/AGE: A Film with Arundhati Roy (2002).

In early 2007, Roy stated that she was working on a second novel.

Awards
Roy was awarded the 1997 Booker Prize for her novel The God of Small Things. The award carried a prize of approximately US$30,000 and a citation that noted, "The book keeps all the promises that it makes". Roy donated the prize money she received, as well as royalties from her book, to human rights causes. Prior to the Booker, Roy won the National Film Award for Best Screenplay in 1989, for the screenplay of In Which Annie Gives It Those Ones, in which she captured the anguish among the students prevailing in professional institutions. In 2015, she returned the national award in protest against religious intolerance and the growing violence by rightwing groups in India.

In 2002, she won the Lannan Foundation's Cultural Freedom Award for her work "about civil societies that are adversely affected by the world's most powerful governments and corporations", in order "to celebrate her life and her ongoing work in the struggle for freedom, justice and cultural diversity".

In 2003, she was awarded "special recognition" as a Woman of Peace at the Global Exchange Human Rights Awards in San Francisco with Bianca Jagger, Barbara Lee, and Kathy Kelly.

Roy was awarded the Sydney Peace Prize in May 2004 for her work in social campaigns and her advocacy of non-violence.

In January 2006, she was awarded the Sahitya Akademi Award, a national award from India's Academy of Letters, for her collection of essays on contemporary issues, The Algebra of Infinite Justice, but she declined to accept it "in protest against the Indian Government toeing the US line by 'violently and ruthlessly pursuing policies of brutalisation of industrial workers, increasing militarisation and economic neo-liberalisation'".

In November 2011, she was awarded the Norman Mailer Prize for Distinguished Writing.