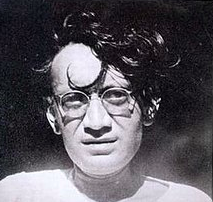 
Saadat Hasan Manto (/mɑːn, -tɒ/; Urdu: سعادت حسن منٹو‎, pronounced [səˈaːd̪ət̪ ˈɦəsən ˈməɳʈoː]; 11 May 1912 – 18 January 1955) was a Pakistani writer, playwright and author born in Ludhiana, British India. Writing mainly in the Urdu language, he produced 22 collections of short stories, a novel, five series of radio plays, three collections of essays and two collections of personal sketches. His best short stories are held in high esteem by writers and critics. Manto was known to write about the hard truths of society that no one dared to talk about. He is best known for his stories about the partition of India, which he opposed, immediately following independence in 1947.
Manto was tried for obscenity six times; thrice before 1947 in British India, and thrice after independence in 1947 in Pakistan, but was never convicted. He is acknowledged as one of the finest 20th century Urdu writers and is the subject of two biographical films: Manto, directed by Sarmad Khoosat and the 2018 film Manto, directed by Nandita Das.