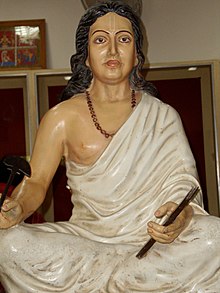 Jayadeva (pronounced [dʑɐjɐˈdeːʋɐ], born c. 1170 CE), also known as Jaidev, was a Sanskrit poet during the 12th century. He is most known for his epic poem Gita Govinda. which concentrates on Krishna's love with the cowherdess, Radha in a rite of spring. This poem, which presents the view that Radha is greater than Krishna, is considered an important text in the Bhakti movement of Hinduism. Little is known of his life, except that he was a loner poet and a Hindu mendicant celebrated for his poetic genius in eastern India. Jayadeva is the earliest dated author of hymns that are included the Guru Granth Sahib, the primary scripture of Sikhism – a religion founded in the Indian subcontinent centuries after his death.

Basohli painting (c. 1730) depicting a scene from Jayadeva's Gita Govinda.
A few poems of Jayadeva written in archaic Odia have been published by the Directorate of Culture, Odisha. They describe the romance of Radha-Krishna and contain ideas very similar to those used in the Gita Govinda.

Two hymns of Jayadeva, have been incorporated in the Guru Granth Sahib, the holy book of the Sikh religion.

The hymns are written in a mixture of Sanskrit and eastern Apabhramsha. There are records narrating how Jayadeva's work had a profound influence on Guru Nanak during his visit to Puri.