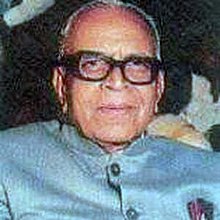 Vinayaka Krishna Gokak (9 August 1909 – 28 April 1992) was a major writer in the Kannada language and a scholar of English and Kannada literatures. He was the fifth writer. to be honoured with the Jnanpith Award in 1990 for Kannada language, for his epic Bharatha Sindhu Rashmi. Bharatha Sindhu Rashmi deals with the Vedic age and is perhaps the longest epic narrative in any language in the 20th Century. In 1961, Gokak was awarded the Padma Shri from the Government of India for Dyava Prithvi.

Literary Career and Success
Gokak was a prolific writer in both Kannada and English. He was deeply influenced by the Kannada poet D.R Bendre who mentored him during his early forays into Kannada literature. Bendre is reputed to have said that were Gokak to allow his talent to bloom in Kannada, there was a bright future in wait for Gokak and Kannada literature. His Kavyanama(Pen name) is "VINAYAKA"

His epic 'Bharatha Sindhurashmi', running into 35000 lines, is notably the longest epic written in this century, for which he received the Jnanpith Award and also honorary doctorates from Karnataka University and Pacific University, USA.

His novel 'Samarasave Jeevana' was translated by his daughter Yashodhara Bhat into English under the title 'The Agony and the Ecstasy' and released to worldwide popularity.

In the 1980s, Karnataka was in the midst of an agitation which demanded the replacement of Sanskrit with Kannada as the medium of instruction in schools. V.K Gokak also headed the 'Gokak Committee' which recommended declaring Kannada as the first language in schools in the state.

Gokak's writing reflected his interest in religion, philosophy, education and cultures. His education abroad prompted him to write two sets of travelogues.

The Navodaya movement was at its peak and Gokak stayed true to his spirit- his poems showed nuances of Victorian poetry, oral traditions in Kannada storytelling and epics in Sanskrit and Kannada.

V.K Gokak wrote many collections of poetry under the pen name Vinayaka. These collections include 'Samudra Geethegalu', 'Baaladeguladalli', 'Abhyudaya', 'Dhyava Prithvi' and 'Urnabha'.

Gokak's anthology of poetry by Indian poets titled The Golden Treasury of Indo Anglican poetry was a treatise on poets like Sri Aurobindo, Sarojini Naidu and Toru Dutta, Nissim Ezekiel and Kamala Das.

In the late 1960s he was deeply influenced by Sri Sathya Sai Baba of Puttaparthi and over the years, Gokak became the medium for translating the guru's words into English and spreading it to the world. His book 'The Advent of Sathya Sai' explains the meaning of Sathya Sai Baba's miracles, his work with the poor and his impact on the educational system.

The state of Karnataka hosts a series of literary events to mark Gokak's birth centenary on 9 August of every year.