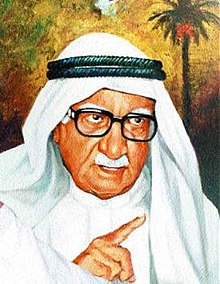 Al-Arrayedh was born in Bombay, India to his Bahraini parents on 8 March 1908. In 1922, he visited Bahrain for the first time at age 14, where he started his education at the country's first school, the Hidaya al-Khalifa school though he did not permanently reside in the island.His parents remain unknown He returned to Bombay in 1926 and enrolled at a local school where he earned his high school diploma. It was at this school that Al-Arrayedh studied Persian and the English language, alongside Urdu, and had expressed a deep interest in Urdu literature. He later studied Urdu literature at the Aligarh Muslim University.
Ebrahim Al-Arrayedh (Arabic: إبراهيم العريّض‎, born 8 March 1908 – died May 2002) was a Bahraini writer and poet, generally considered to be one of Bahrain's greatest poets and one of the leaders of the Bahraini literary movement in the 20th century.