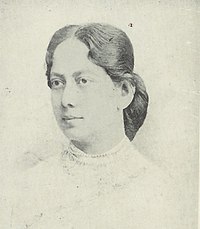 Swarnakumari Devi (Bengali: স্বর্ণকুমারী দেবী; 28 August 1855 – 3 July 1932) was a poet, novelist, musician and social worker from the Indian subcontinent. She was the first among the women writers in Bengal to gain prominence.
She was the fourth amongst the daughters of Debendranath Tagore and was a granddaughter of Dwarkanath Tagore. Three of her sisters, Soudamini, Sukumari and Saratkumari, were older than she was. Barnakumari was the youngest sister. Soudamini was one of the earliest students of Bethune School. Others in the Tagore family had followed her, but it seems that Swarnakumari had her education primarily at home.[2] She was five years older than Rabindranath Tagore.
Education was valued in the Jorasanko Thakur Bari. Swarnakumari recalled how, when her father Debendranath learned that the governess was writing something on a slate and having the girls copy it, he stopped the mechanical practice and brought in a better teacher. In his memoirs Rabindranath wrote, "We learnt much more at home than we had to at school."
Swarnakumari had a great capability of picking up friendship with other girls from an early age. As per the custom of the day, each pair of friends had a common name, which they used to call each other. Swarnakumari had many friends – Mistihasi, Milan, Bihangini and so on.