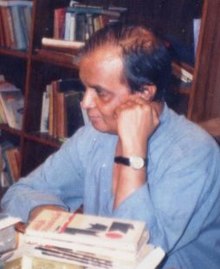 Ahmed Sofa (Bengali: আহমদ ছফা, pronounced [aɦmɔd sɔfa]; 30 June 1943 – 28 July 2001) was a Bangladeshi writer, thinker, novelist, poet, and public intellectual. Sofa is considered by many, including National Professor Abdur Razzaq and Salimullah Khan, to be the most important Bengali Muslim writer after Mir Mosharraf Hossain and Kazi Nazrul Islam. A writer by occupation, Sofa wrote 18 non-fiction books, 8 novels, 4 collections of poems, 1 collection of short stories, and several books in other genres.
Sofa's Bangali Musalmaner Man (The Mind of the Bengali Muslims, 1981) is a highly acclaimed critical survey of the formation of Bengali Muslims' identity, causes of their backwardness, their development as a community, and their intellectual progress. Anisuzzaman and many others consider Sofa's Bangali Musalmaner Man one of the greatest non-fiction books written in the Bengali language. In Buddhibrittir Natun Binyas (A New Mode of Intellectualism, 1972), Sofa mapped the intellectual landscape of Bangladesh, delineating general opportunistic tendencies of Bangladeshi intellectuals, their collaboration with the Establishment, and their failure to bring any real material change in postcolonial Bangladesh.
Characterized by “a freshness of language”, and "constant experimentation, and novelty" of subject matter and narration, his fictions portrayed Bangladesh with all its social, spiritual and political nuances. acclaimed his intricate characterization depicting psychological and sociocultural subtleties with realism. Abul Fazal, and many others considered Sofa's Omkar (The Om, 1975) the best literary expression of the liberation movement of Bangladesh. Gabhi Bittanta (A Tale of a Cow, 1995), a novel satirizing university teachers involved in party politics and corruption is among the best satires in Bengali literature. Pushpa Briksa ebang Bihanga Puran (Tales of Flowers, Trees, and Birds, 1996) recounts Sofa's spiritual attachments with birds, plants and trees reflecting his profound biophilia and ecoconsciousness. Some of his long poems include Ekti Prabeen Bater Kache Prarthana (Prayer to an Ancient Banayan Tree, 1977), and Basti Ujar (The Eviction of the Shanti Town Dwellers), etc.
Sofa and his works guided, inspired, influenced, and continue to inspire and influence many writers, filmmakers, painters, artists, and intellectuals including Humayun Ahmed, Muhammed Zafar Iqbal, Tareque Masud, Farhad Mazhar, Salimullah Khan, etc He remains one of the most powerful intellectual influences in Bangladesh through his works and legacy. For a bohemian lifestyle, and outspoken nature, Sofa was a controversial figure during his lifetime. He was called rebel, mad, insolent, devoid of respect for authority, and an overly uncompromising figure among the intellectuals. Never to be co-opted by the establishment, Sofa rejected Lekhak Shibir Award in 1975, and Sa'dat Ali Akanda Award offered by Bangla Academy in 1993. He was awarded Ekushe Padak posthumously by the Government of Bangladesh in 2002.