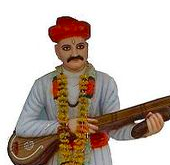 Namdev , also transliterated (traditionally, c. 26 October 1270 – c. 3 July 1350) was an Indian poet and saint from Narsi, Hingoli, Maharashtra India who is significant to the Varkari sect of Hinduism. Bhagat Namdev's writings were also recognized by the Gurus of Sikhism and are included in the holy book of Sikhism, the Sri Guru Granth Sahib. Namdev worshipped Vithoba, one of the many forms of lord Vishnu but Ronald McGregor states that in the larger context of Rama, Namdev was not referring to the hero described in the Hindu epic Ramayana, but to a pantheistic Ultimate Being.
The details of Namdev's life are unclear. He is the subject of many miracle-filled hagiographies composed centuries after he died. Scholars find these biographies to be inconsistent and contradictory.
Namdev was influenced by Vaishnavism and became widely known in India for his devotional songs set to music (bhajan-kirtans). His philosophy contains both nirguna and saguna Brahman elements, with monistic themes. Namdev's legacy is remembered in modern times in the Varkari tradition, along with those of other gurus, with masses of people walking together in biannual pilgrimages to Pandharpur in south Maharashtra.