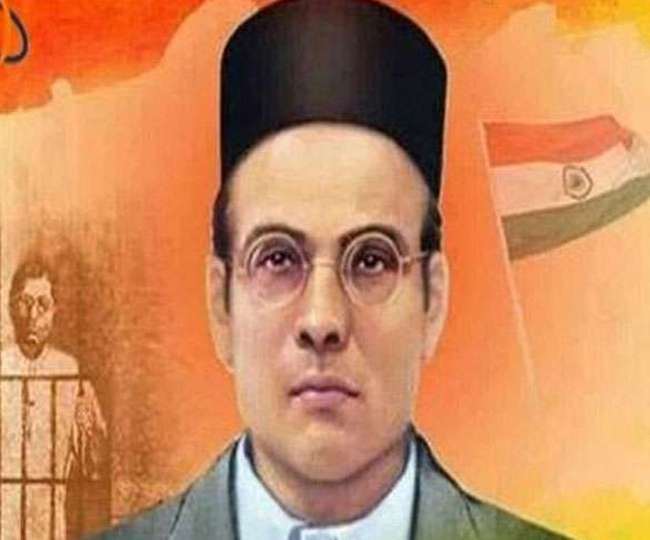 Vinayak Damodar Savarkar commonly known as 'Swatantryaveer Savarkar' in Marathi language, was an Indian independence activist and politician who formulated the Hindu nationalist philosophy of Hindutva. He was a leading figure in the Hindu Mahasabha.

As a response to the Muslim League, Savarkar joined the Hindu Mahasabha and popularized the term Hindutva (Hinduness), previously coined by Chandranath Basu, to create a collective "Hindu" identity as an essence of Bharat (India). Savarkar was an atheist and also a pragmatic practitioner of Hindu philosophy.

Savarkar began his political activities as a high school student and continued to do so at Fergusson College in Pune. He and his brother founded a secret society called Abhinav Bharat Society. When he went to the United Kingdom for his law studies, he involved himself with organizations such as India House and the Free India Society. He also published books advocating complete Indian independence by revolutionary means. One of the books he published called The Indian War of Independence about the Indian rebellion of 1857 was banned by the British authorities. In 1910, Savarkar was arrested and ordered to be extradited to India for his connections with the revolutionary group India House.

On the voyage back to India, Savarkar staged an attempt to escape and seek asylum in France while the ship was docked in the port of Marseilles. The French port officials however handed him back to the British in contravention of international law. On return to India, Savarkar was sentenced to two life terms of imprisonment totalling fifty years and was moved to the Cellular Jail in the Andaman and Nicobar Islands.

After 1937, he started travelling widely, becoming a forceful orator and writer, advocating Hindu political and social unity. Serving as the president of the Hindu Mahasabha political party, Savarkar endorsed the idea of India as a Hindu Rashtra (Hindu Nation). Savarkar was critical of the decision taken by the Congress working committee in its wardha session of 1942, passed a resolution which said to British: "Quit India but keep your armies here" which was reinstallation of British military rule over India, that he felt would be much worse. In July 1942, as he felt extremely stressed carrying out his duties as the president of Hindu Mahasabha, and as he needed some rest; he resigned from the post of the president of the Hindu Mahasabha. The timing of which, unfortunately coincided with Gandhi’s Quit India Movement.

In 1948, Savarkar was charged as a co-conspirator in the assassination of Mahatma Gandhi; however, he was acquitted by the court for lack of evidence. Savarkar resurfaced in the popular discourse after the coming of the BJP into power in 1998 and again in 2014 with the Modi led BJP government at the center.