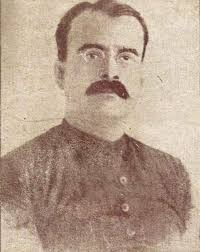 Brij Narayan Chakbast, also spelled, Brij Narain Chakbast,( 19 January 1882- 12 February 1926) (Kashmiri: बृज नारायण चकबस्त, Urdu: برج نارائن چکبست‎) was an Indian Urdu poet.
Works
Chakbast was primarily a poet but his prose is also considered at par with his poetry. Chakbast's premature death was a great loss for Urdu but whatever he left is exemplary and is considered among the gems of Urdu literature. He was strongly influenced by Ghalib, Mir Anis and Aatish. Chakbast was primarily a nazm poet. He began his poetic career with a nazm in 1894. He wrote nazms, mathnavi, a play, and about 50 ghazals. His Ramayan ka ek Scene is strongly remniscent of Marsiya of Mir Anis. His verses from his ghazal

Nala-e-Yaas, and a play named

Kulliyate-Chakbast and Maqalaat-e-Chakbast is the complete collection of Chakbast's works in poetry and prose that was published posthumously on the birth centenary of the poet, compiled by Kalidas Gupta 'Raza' around 1983.

Legacy
The 2015 film Masaan starts with and contains various examples of poetry and shaayari by Chakbast along with the works of Basheer Badr, Akbar Allahabadi, Mirza Ghalib and Dushyant Kumar. Explaining this as a conscious tribute, the film's lyrics writer Varun Grover explained that he wanted to show Shaalu (portrayed by Shweta Tripathi) as a person whose hobby is to read Hindi poetry and shaayari, as this is a common hobby of millennial and generation x youngsters in Northern India, especially when in love, but this aspect is rarely shown in Hindi films.