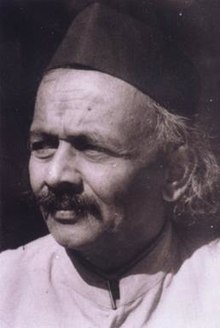 Dattatreya Ramachandra Bendre (31 January 1896 – 26 October 1981), popularly known as Da. Ra. Bendre, was a Kannada poet of the Navodaya Period. He was given the honorific Varakavi ('the gifted poet-seer'). Bendre was awarded the Jnanapita. for his 1964 poetry collection, ನಾಕು ತಂತಿ (Naaku Tanti). Bendre published most of his work as ಅಂಬಿಕಾತನಯದತ್ತ (Ambikatanayadatta; lit. Datta, son of Ambika). Often mistaken for a pseudonym in the Western sense, Bendre described Ambikatanayadatta as the "universal inner voice" within him that dictated what he (Bendre) then presented in Kannada to the world. He was recognized as the Karnataka Kavi Kula Thilaka ("The crown-jewel among Kannada Poets") by the Udupi Adamuru Matha. He was also awarded the Padma Shri in 1968 and made a fellow of the Sahitya Akademi in 1969.

Works and message
Bendre started with simple and earthly romantic poetry, often using the "spoken" form of the language. His later works dug deeper into social and philosophical matters. According to G. S. Amur, a leading critic in Kannada, "Bendre believed in the value of an integrated personality but loved to project himself as a threefold being: Dattatreya Ramachandra Bendre - the biological self, the thinking self and the creative self. According to Amur, the three 'selves' were conceived as mutually supporting 'selves', as the imagery Bendre used to concrete this idea clearly suggests. He spoke of Ambikatanayadatta and Professor Bendre as two entities that were closely related just as the river and its bank or the belly and the back. One could not exist without the other.

Bendre is usually considered the father figure of modern Kannada poetry. His poems are linked to the Kannada poetic tradition through their use of folklore, the vachanas and the Kirtans. Apart from native prosodic forms, Bendre also employed native imagery, folk beliefs, references to Indian mythology and the language spoken by the common people. Nada Lila ("The Play of Sounds") is perhaps the most remarkable among his collection of poems. All the features of Navodaya poetry like patriotism, the reformatory zeal, critical attitude, Indian culture, consolidation of traditional strength, mystical faith and assertion of a poet's individuality can be found in this collection of poems.[original research?]

Bendre used diverse techniques for spiritual lyrics, classical style for sonnets, and traditional as well as colloquial idioms for pastoral and folk lyrics. Symbolism is characteristic of his poetry. His poem Patargitti (Butterfly) which is sung as a nursery rhyme is about the colors of temptation. Mudalmaneya ("Dawn") is symbolic of all pervading peace or, the poet's yearning for it. In the Kuniyonu bara ('Let us Dance") all diverse currents of thought meet in on great confluence. Apparently, all of Bendre's poems could be set to music and abound in alliteration; but there was always a hidden layer of meaning which only a trained poetic mind could decipher.[original research?]

Towards the end of his life Bendre was deeply absorbed in numbers. This was not just a new interest but one that became a central concern. When Dom Moraes visited him during his exploration of Karnataka in 1976, he found Bendre immersed in numbers. In his books Vishvadharanasutra and A Theory of Immortality Bendre made ambitious attempts to intuit all knowledge into numbers.

In popular culture
In 1972, film director and playwright Girish Karnad made a Kannada documentary film, D. R. Benre on his life and work.