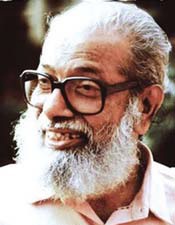 Dr. K. Ayyappa Paniker, sometimes spelt "Ayyappa Panicker" (12 September 1930 – 23 August 2006), was an influential Malayalam poet, literary critic, and an academic and a scholar in modern and post-modern literary theories as well as ancient Indian aesthetics and literary traditions. He was one of the pioneers of modernism in Malayalam poetry, where his seminal works like Kurukshethram (1960), considered a turning point in Malayalam poetry, Ayyappapanikkarude Krithikal and Chintha and several essays were an important influence on the playwrights of his generation.

In an academic career which ran in consonance with his literary one, and spanned four decades, he taught in various colleges and universities before retiring as the Director, Institute of English, University of Kerala. He published over 25 works, translated several important work to Malayalam, including Guru Granth Sahib and a book in French; as a scholarly editor he produced numerous anthologies on Indian literature, he was the chief editor of the Sahitya Akademi's Indian Literary Encyclopaedia. Another important work by him Indian Narratology, published by IGNCA, was the first of its kind to study various forms of the art of narration, in Indian literature, starting with Vedic and oral literature to Buddhist and contemporary literature.