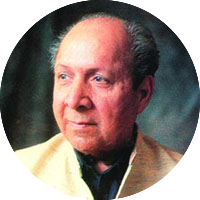 Muhammad Aurangzeb or Qateel Shifai (Urdu: قتِیل شِفائ ‎), (24 December 1919 – 11 July 2001) was a Pakistani Urdu poet and lyricist. Qateel Shifai was born as Muhammad Aurangzeb in 1919 in British India (now Pakistan). He was of Hindkowan background. He adopted Qateel Shifai as his pen name in 1938, under which he was known in the world of Urdu poetry. "Qateel" was his "takhallus" and "Shifai" was in honour of his ustaad (teacher) Hakeem Mohammed Yahya Shifa Khanpuri, whom he considered his mentor.

Death and legacy
Qateel Shifai died on 11 July 2001 in Lahore, Pakistan. Over 20 collections of verse and over 2,500 film songs for Pakistani and Indian films were published. He wrote songs for 201 Pakistani and Indian films. His talent crossed the borders. His poetry has been translated into numerous languages including Hindi, Gujarati, English, Russian and Chinese. On Qateel Shifai's 11th death anniversary in 2012, in an interview to a major newspaper, a prominent literary figure Dr Salahuddin Darvesh said, "Shifai was one of those great poets of 20th century who had gained international recognition." Qateel Shifai received the 'Pride of Performance Award' in 1994 for his contribution to literature by the Government of Pakistan, Adamjee Literary Award, 'Naqoosh Award', 'Abbasin Arts Council Award' were all given to him in Pakistan, and then the much coveted 'Amir Khusro Award' was given in India. In 1999, he received a 'Special Millennium Nigar Award' for his lifetime contributions to the Pakistan film industry. Qateel Shifai produced a film in his mother language—Hindko—in 1970. It was the first Hindko film which was named "Qissa Khwani". The film was released in 1980. He died on 11 July 2001 in Lahore. The street on which he lived in Lahore has been named Qateel Shifai Street after him. There is also a sector of Haripur city that has been named after him – Mohallah Qateel Shifai.

Includes both Pakistani and Indian films.