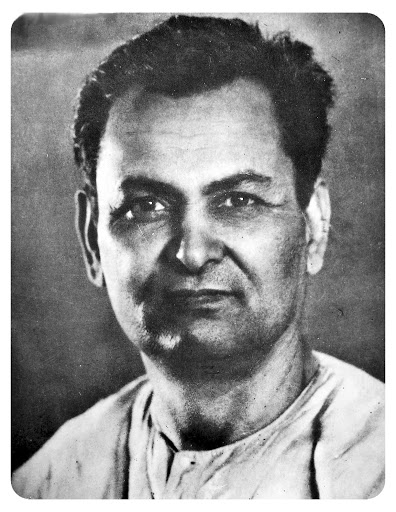 Rahul Sankrityayan (9 April 1893 – 14 April 1963), is called the Father of Indian Travelogue Travel literature. He is the one who played a pivotal role to give travelogue a 'literature form', was one of the most widely travelled scholars of India, spending forty-five years of his life on travels away from his home.

He travelled to many places and wrote many travelogue approximately in the same ratio. He is also famously known for his authentic description about his travels experiences, for instance- in his travelogue "Meri Laddakh Yatra" he presents overall regional, historical and cultural specificity of that region judiciously. He became a Buddhist monk (Bauddha Bhikkhu) and eventually took up Marxist Socialism. Sankrityayan was also an Indian nationalist, having been arrested and jailed for three years for creating anti-British writings and speeches. He is referred to as the 'Greatest Scholar' (Mahapandit) for his scholarship. He was both a polymath as well as a polyglot. The Government of India awarded him the civilian honour of the Padma Bhushan in 1963.

Philosophy of his Life

In his initial days he was a keen follower of Arya Samaj of Swami Dayananda Saraswati. Buddhism came to him and changed his life. He lost faith in God's existence but still retained faith in reincarnation. Later he moved towards Marxist Socialism and rejected the concepts of reincarnation and afterlife also. The two volumes of Darshan-Digdarshan, the collected history of World's Philosophy give an indication of his philosophy when we find the second volume much dedicated to Dharmakirti's Pramana Vartika. This he discovered in Tibetan translation from Tibet.

Travels
Sankrityayan's travels took him to different parts of India including Ladakh, Kinnaur, and Kashmir. He also travelled to several other countries including Nepal, Tibet, Sri Lanka, Iran, China, and the former Soviet Union. He spent several years in the "Parsa Gadh" village in the Saran district in Bihar. The village's entry gate is named "Rahul Gate". While travelling, he mostly used surface transport, and he went to certain countries clandestinely; he entered Tibet as a Buddhist monk. He made several trips to Tibet and brought valuable paintings and Pali and Sanskrit manuscripts back to India. Most of these were a part of the libraries of Vikramshila and Nalanda Universities. These objects had been taken to Tibet by fleeing Buddhist monks during the twelfth and subsequent centuries when the invading Muslim armies had destroyed universities in India. Some accounts state that Rahul Sankrityayan employed twenty-two mules to bring these materials from Tibet to India. Patna Museum, Patna, has a special section of these materials in his honour, where a number of these and other items have been displayed.

Sankrityayan was a polyglot, well versed in several languages and dialects, including Hindi, Sanskrit, Pali, Bhojpuri, Magahi, Urdu, Persian, Arabic, Tamil, Kannada, Tibetan, Sinhalese, French and Russian. He was also an Indologist, a Marxist theoretician, and a creative writer. He started writing during his twenties and his works, totalling well over 100, covered a variety of subjects, including sociology, history, philosophy, Buddhism, Tibetology, lexicography, grammar, textual editing, folklore, science, drama, and politics. Many of these were unpublished. He translated Majjhima Nikaya from Prakrit into Hindi.

One of his most famous books in Hindi is Volga Se Ganga (A journey from the Volga to the Ganges) – a work of historical fiction concerning the migration of Aryans from the steppes of the Eurasia to regions around the Volga river; then their movements across the Hindukush and the Himalayas and the sub-Himalayan regions; and their spread to the Indo-Gangetic plains of the subcontinent of India. The book begins in 6000 BC and ends in 1942, the year when Mahatma Gandhi, the Indian nationalist leader called for the quit India movement. It was published in 1942. A translation into English of this work by Victor Kiernan was published in 1947 as From Volga to Ganga. It was translated by K.N. Muthiya-Tamilputhakalayam in Tamil as Valgavil irundu gangai varai and is still considered a best-seller. The Kannada translation done by B.N Sharma as "Volga Ganga" . The Telugu translation (Volga nunchi Ganga ku) inspired many readers. Volga muthal Ganga vare, the Malayalam translation, became immensely popular among the young intellectuals of Kerala and it continues to be one of the most influential books of its times. The Bengali version is Volga Theke Ganga [ভল্গা থেকে গঙ্গা], which is still acclaimed by the critics.

More than ten of his books have been translated and published in Bengali. He was awarded the Padmabhushan in 1963, and he received the Sahitya Akademi Award in 1958 for his book Madhya Asia ka Itihaas.

He maintained daily diaries in Sanskrit which were used fully while writing his autobiography. In spite of profound scholarship, he wrote in very simple Hindi that a common person could follow. He wrote books of varied interest. He was aware of limitations of Hindi literature and singularly made up the loss in no small measure.