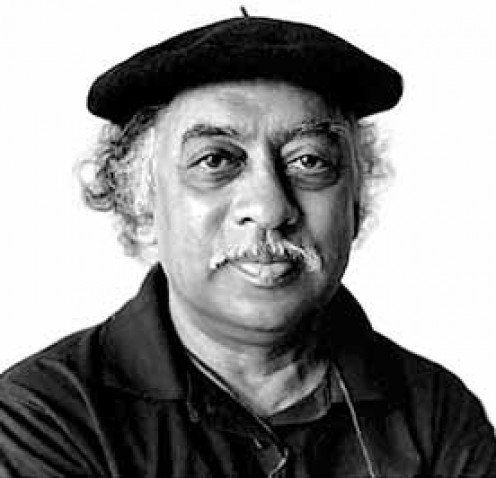 Dilip Purushottam Chitre (17 September 1938 – 10 December 2009) was one of the foremost Indian poets and critics to emerge in the post Independence India. Apart from being a very important bilingual writer, writing in Marathi and English, he was also a teacher, a painter and filmmaker and a magazine columnist.

Works
Poetry
He was a bilingual writer and wrote mostly in Marathi. His Ekun Kavita or Collected Poems were published in the 1990s in three volumes. As Is, Where Is selected English poems (1964–2007) and "Shesha" English translation of selected Marathi poems, both published by Poetrywala, were published in 2007. He also edited An Anthology of Marathi Poetry (1945–1965). He was an accomplished translator of prose and poetry. His most famous translation was of the celebrated 17th century Marathi bhakti poet Tukaram (published as Says Tuka). He translated Anubhavamrut by twelfth century bhakti poet Dnyaneshwar. He also wrote poetry in English. Travelling in a Cage (1980) was his first and only book of English poems.

Films
He started his professional film career in 1969 and made one feature film, about a dozen documentary films, several short films and about 20 video documentary features. He wrote the scripts of most of his films as well as directed or co-directed them. He also scored the music for some of them.

Awards and honors
He worked as an honorary editor of the quarterly New Quest, Mumbai.

Among Chitre's honours and awards are several Maharashtra State Awards, the Prix Special du Jury for his film Godam at the Festival des Trois Continents in 1984, the Ministry of Human Resource Development's Emeritua Fellowship, the University of Iowa's International Writing Program Fellowship, the Indira Gandhi Fellowship, and the Villa Waldberta Fellowship for residence given by the city of Munich, Bavaria, Germany. He was a D.A.A.D. ( German Academic Exchange) Fellow and Writer-in-Residence at the Universities of Heidelberg and Bamberg in Germany in 1991–92. He was Director of Vagarth, Bharat Bhavan Bhopal and convenor-director of the Valmiki World Poetry Festival ( New Delhi,1985) and International Symposium of Poets ( Bhopal, 1985), a Keynote Speaker at the World Poetry Congress in Maebashi, Japan (1996) and at the Ninth International Conference on Maharashtra at Saint Paul, Minnesota, USA in 2001 and Member of the International Jury at the Literature festival Berlin, 2001.

He was member of a three-writer delegation ( along with Nirmal Verma and U. R. Ananthamurthy) to the Soviet Union (Russia, Ukraine, and Georgia), Hungary, the Federal Republic of Germany and France in the spring and summer of 1980 and to the Frankfurter Buchmesse in Frankfurt, Germany in 1986; he also gave readings, lectures, talks, participated in seminars and symposia, and conducted workshops in creative writing and literary translation in Iowa City, Chicago, Tempe, Paris, London, Weimar, Saint Petersburg, Berlin, Frankfurt, Konstanz, Heidelberg, Bamberg, Tübingen, Northfield, Saint-Paul/Minneapolis, New Delhi, Bhopal, Mumbai, Kochi, Vadodara, Kolhapur, Aurangabad, Pune, Maebashi, and Dhule.