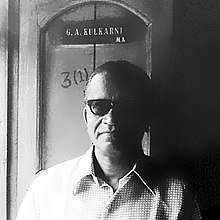 Kulkarni grew up in Belgaum. After earning his master's degree, he taught English at JSS College in Dharwad for about 30 years. He had very strong liking for Dharwad and Belgaum. For medical treatment of his eyes, he reluctantly moved to Pune in 1985. A major road in the Kothrud area of Pune, where Kulkarni lived for couple of years before his death, has been named after him.

Kulkarni, who bought new strength and vitality to the Marathi short story, is admittedly the most distinguished exponent of that genre. A contemporary of Gangadhar Gadgil, Arvind Gokhale and Vyankatesh Madgulkar, he did not subscribe to the cause of modernism in literature. He charted his own separate course and cultivated new acuity and taste for a class of faithful readers.

Kulkarni created a world of his own in his short stories where his characters are in pursuit of the unknowable destiny. A dark mode reflects the inscrutable ways in which destiny shadows his characters. His use of symbolism, allegory and irony provides his stories a unique texture and ethos. His world encompasses a wide diversity of locales, situations, characters and experiences; yet, in his earlier stories, it is demarcated by the region bordering Maharashtra and Karnataka. The mythic, allegorical experiences make it difficult to sort out the realities from the dreams, themes, and meditations. Yet, it is possible for the reader to identify with his characters, places, and experiences because of his keen observation of human, animal, and social worlds in their beauty and deformity.

Critics observe that characters in Kulkarni's world are multifaceted, but they are not independent. They lead their lives as if they are puppets guided by an unseen hand and are unable to change the direction. Why they follow that path to their demise or why they cannot change it by their volition is not known. In that sense, his work is a reversal of direction fostered by the modernist short story in Marathi. GA's earlier short stories depicted the tragic and cruel aspects of the human situation. His later works were almost Kafkaesque, without Kafka-like black humour. Some of his later works were allegorical and reminiscent of Borges.

Some of Kulkarni's short stories have been translated into English, Hindi, and Kannada. He was honoured in 1973 with a Sahitya Akademi Award for his collection of short stories Kajalmaya. Critically acclaimed Marathi movie Kairee, which was directed by Amol Palekar, was based on one of his short stories. Based on GA's short story, Director Kranti Kanade made short film Chaitra that went on to win five National Film Awards in 2002.

Kulkarni was a prolific correspondent. Though he had an obsession to keep his life private, he also longed to reach out through letters to his friends who shared his tastes. Four volumes of his letters were published after his death. He had written many of those letters to "Shri Pu" Bhagwat, Sunita Deshpande, Madhav Achawal, Jaywant Dalvi, Anantrao Kulkarni, and "Ma Da" Hatkanangalekar.

Kulkarni translated five novels by Conrad Richter into Marathi in the 1960s for a project which USIS in India had initiated for getting some prominent American writings translated into Indian languages. He also wrote the book Manase Arbhat Ani Chillar, which contains seemingly autobiographical musings.