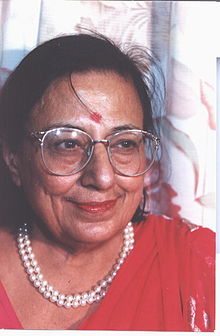 Smt. Sundri Uttamchandani (28 September 1924 – 8 July 2013) was a noted Indian writer. She wrote mostly in Sindhi language. She was married to progressive writer A. J. Uttam.
In 1986 she was awarded the Sahitya Akademi Award by Sahitya Akademi in Sindhi for her Book Vichhoro, a compilation of nine short stories.
Sundri Uttamchandani was born on 28 September 1924 at Hyderabad Sindh (now in Pakistan). Hydrabad was the capital of Sindh before the conquest of Sindh by the British. Though it lost its position as a capital city but, it continued to be a thriving centre of education literature and culture. All reform movements were rooted in its soil. At the very young age, Sundri was exposed to a vast repertoire of folk and mythological tales which were narrated by her parents to her and other children of the extended joint family. During her youth the freedom movement was sweeping across the country and she could not but be drawn to it. While still in college she translated a story "Bhadur Maao Ji Bahadur Deeah" (A brave daughter of a brave mother). This was her initiation in the literary field.

Available all over India through Sindhi Sangat