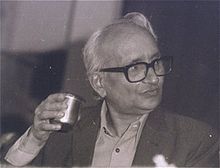 Mogeri Gopalakrishna Adiga (1918–1992) was a modern Kannada poet. He is known by some commentators as the "pioneer of New style" poetry.

His style has been described[by whom?] as a response to the independence of India from British rule in 1947. The style called Navya was generally about the new times. Inspired by modern Western literature and Indian tradition, he set out to portray the "disillusionment and angst of the times".