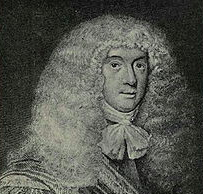 Charles Cotton (28 April 1630 – 16 February 1687) was an English poet and writer, best known for translating the work of Michel de Montaigne from the French, for his contributions to The Compleat Angler, and for the influential The Compleat Gamester attributed to him.
He was born in Alstonefield, Staffordshire, at Beresford Hall, near the Derbyshire Peak District. His father, Charles Cotton the Elder, was a friend of Ben Jonson, John Selden, Sir Henry Wotton and Izaak Walton. The son was apparently not sent to university, but was tutored by Ralph Rawson, one of the fellows ejected from Brasenose College, Oxford, in 1648. Cotton travelled in France and perhaps in Italy, and at the age of twenty-eight he succeeded to an estate greatly encumbered by lawsuits during his father's lifetime. Like many Royalist gentlemen after the English Civil War the rest of his life was spent chiefly in quiet country pursuits, in Cotton's case in the Peak District and North Staffordshire. His Voyage to Ireland in Burlesque (1670) states that he held a Captain's commission and served in Ireland.