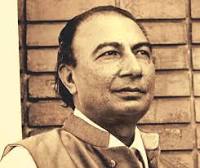 Abdul Hayee (8 March 1921 – 25 October 1980), popularly known by his takhallus (pen name) Sahir Ludhianvi, was an Indian poet and film songs lyricist who wrote in the Hindi and Urdu languages.
His work influenced Indian cinema, in particular Bollywood film. Sahir won a Filmfare Award for Best Lyricist for Taj Mahal (1963). He won a second Filmfare Award for Best Lyricist for his work on Kabhie Kabhie (1976). He was awarded the Padma Shri in 1971. On 8 March 2013, the ninety-second anniversary of Sahir's birth, a commemorative stamp was issued in his honour. Sahir wrote,

Sahir was different from his contemporaries in that he did not praise Khuda (God), Husn (beauty) or Jaam (wine). Instead, he wrote bitter yet sensitive lyrics about the declining values of society; the senselessness of war and politics; and the domination of consumerism over love. His love songs, tinged with sorrow, expressed his realisation that there were other, starker concepts more important than love. Sahir might be called the "bard for the underdog". Close to his heart were the farmer crushed by debt, the soldier gone to fight someone else's war, the woman forced to sell her body, the youth frustrated by unemployment and the family living on the street for instance. Jawaharlal Nehru, Prime Minister of India said he was moved by Sahir's lyrics in Pyaasa.[citation needed] Vijay, as he is passing through a red light area sings,
"ये कूचे, ये नीलामघर दिलकशी के,
ये लुटते हुए कारवां ज़िंदगी के,
कहाँ है कहाँ है मुहाफ़िज़ खुदी के?
जिन्हें नाज़ है हिंद पर,वो कहाँ हैं?"

Sahir's poetry was influenced by noted Pakistani poet, Faiz Ahmed Faiz. Like Faiz, Sahir gave Urdu poetry an intellectual element that caught the imagination of the youth of the 1940s, 1950s and 1960s and reflected the feelings of the people of that period. He roused people from an independence-induced smugness. He would pick on the self-appointed custodian of religion, the self-serving politician, the exploitative capitalist, and the war-mongering super-powers. Sahir wrote with verve about the arrest of progressive writers in Pakistan; the launch of the satellite Sputnik and the discovery of Ghalib by a government lusting after minority votes. He wrote Kahat-e-Bangal (The Famine of Bengal) at 25 years of age. Subah-e-Navroz (Dawn of a New Day), mocks the way people celebrate while the poor exist in squalor. Of the Taj mahal, he wrote,
"मेरे महबूब कहीं और मिला कर मुझसे,
बज़्म- ए-शाही में ग़रीबों का गुज़र क्या माने.
सबत जिन राहों पर है सतबते शाही के निशां
उसपे उल्फत भरी रूहों का गुज़र क्या माने?"-

Sahir Ludhianvi asks his lover to meet him anywhere else but at the Taj Mahal: although the tomb has been a symbol of luxurious monarchy for years, there is no need for beautiful (but not famous) hearts to travel to meet there.
Sahir Ludhianvi recited this poetry couplet at his college event, when he was barely 19 years old, and created an uproar in the literary circles:

Why should the busy age waste its time for me?"