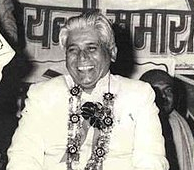 Shivmangal Singh 'Suman' (5 August 1915 – 27 November 2002) was a noted Hindi poet and academician. Upon his death, the then Prime Minister of India Atal Bihari Vajpayee said on 27 NOV 2002 in Assembly that, "Dr Shiv Mangal Singh ‘Suman’ was not only a powerful signature in the field of Hindi poetry, but he was also the custodian of the collective consciousness of his time. His creations not only expressed the pain of his own feelings, but were also fearless constructive commentary on the issues of the era".
Shivmangal Singh 'Suman' was born on 5 August 1915 at Jhagarpur, Unnao district in Uttar Pradesh (India). He was a leading Hindi writer and poet. He earned a M.A. and Ph.D. in Hindi from Benaras Hindu University. The university also honoured him with a D.Litt. in 1950.
Suman worked as the Vice Chancellor of Vikram University (Ujjain) during 1968-78; the Vice-President of Uttar Pradesh Hindi Sansthan, Lucknow; Press & Cultural Attache, Indian Embassy, Kathmandu (Nepal) during 1956-61; and the President, Association of Indian Universities (New Delhi) during 1977-78.
He was the Executive President, Kalidas Academy, Ujjain, until he died of heart attack on 27 November 2002.
Awards and honours