The Golden Gate - I (A Novel In Verse) 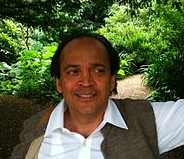 1.1.
To make a start more swift and weighty,
Hail Muse. Dear Reader, once upon
A time, say, circa 1980,
There lived a man. His name was John.
Successful in his field though only
Twenty-six, respected, lonely,
One evening as he walked across
Golden Gate Park, the ill-judged toss
Of a red frisbee almost brained him.
He thought, "Who'd gloat? Who would be glad?
Would anybody? " As it pained him,
He turned from this dispiriting theme
To ruminations less extreme.

1.2.
He tuned his thoughts to electronic
Circuitry. This soothed his mind.
He left irregular (moronic)
Sentimentality behind.
He thought of or-gates and of and-gates,
Of ROMs, of nor-gates, and of nand-gates,
Of nanoseconds, megabytes,
And bits and nibbles… but as flights
Of silhouetted birds move cawing
Across the pine-serrated sky,
Dragged from his cove, not knowing why,
He feels an urgent riptide drawing
Him far out, where, caught in the kelp
Of loneliness, he cries for help.

1.3.
John's looks are good. His dress is formal.
His voice is low. His mind is sound.
His appetite for work's abnormal.
A plastic name tag hangs around
His collar like a votive necklace.
Though well-paid, he is far from reckless,
Pays his rent promptly, jogs, does not
Smoke cigarettes, and rarely pot,
Eschews both church and heavy drinking,
Enjoys his garden, like to read
Eclectically from Mann to Bede.
(A surrogate, some say, for thinking.)
friends claim he's grown aloof and prim.
(His boss, though, is well-pleased with him.)

1.4.
Grey-eyed, blond-haired, aristocratic
In height, impatience, views, and face,
Discriminating though dogmatic,
Tender beneath a carapace
Of well-groomed tastes and tasteful grooming,
John, though his corporate stock is booming,
For all his mohair, serge, and tweed,
Senses his life has run to seed.
A passionate man, with equal parts of
Irritability and charm,
Without as such intending harm,
His flaring temper singed the hearts of
Several woman in the days
Before his chaste, ambitious phase.

1.5.
John notes the late September showers
Have tinged the blond hills round the bay
With a new green. He notes the flowers
In their pre-winter bloom. The way
That, when he was a child, the mystery
Of San Francisco's restless spark,
It strikes him now as, through the park,
Wrested from old dunes by the westward
Thrust of the greenbelt to the slow
Pacific swell, his footsteps go.
But it is late. The birds fly nestward
Towards the sunset, and the arc
Of darkness drifts across the park.

1.6.
It's Friday night. The unfettered city
Resounds with hedonistic glee.
John feels a cold cast of self-pity
Envelop him. No family
Cushions his solitude, or rather,
His mother's dead, his English father,
Retired in his native Kent,
Rarely responds to letters sent
(If rarely) by his transatlantic
Offspring. In letters to The Times
He rails against the nameless crimes
Of the post office. Waxing frantic
About delays from coast to coast,
He hones his wit and damns the post.

1.7.
A linkless node, no spouse or sibling,
No children - John wanders alone
Into an ice cream parlor. Nibbling
The edges of a sugar cone
By turns, a pair of high school lovers
Stand giggling. John, uncharmed, discovers
His favorite flavors, Pumpkin Pie
And Bubble Gum, decides to buy
A double scoop; sits down; but whether
His eyes fall on a knot of three
Schoolgirls, a clamorous family,
Or, munching cheerfully together,
A hippie and a Castro clone,
It hurts that only he's alone.

1.8.
He goes home, seeking consolation
Among old Beatles and Pink Floyd —
But "Girl" elicits mere frustration,
While "Money" leaves him more annoyed.
Alas, he hungers less for money
Than for a fleeting Taste of Honey.
Murmuring, "Money — it's a gas! …
The lunatic is on the grass,"
He pours himself a beer. Desires
And reminiscences intrude
Upon his unpropitious mood
Until he feels that he requires
A one-way Ticket to Ride — and soon —
Across the Dark Side of the Moon.

1.9.
He thinks back to his day at college,
To Phil, to Berkeley friends, to nights
When the pursuit of grades and knowledge
Foundered in beery jokes and fights.
Eheu fugaces… Silicon Valley
Lures to ambition's ulcer alley
Young graduates with siren screams
Of power and wealth beyond their dreams,
Ejects the lax, and drives the driven,
Burning their candles at both ends.
Thus files take precedence over friends,
Labor is lauded, leisure riven.
John kneels bareheaded and unshod
Before the Chip, a jealous God.