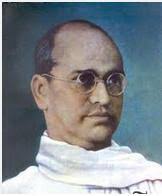 Vallathol Narayana Menon (16 October 1878 – 13 March 1958) was a poet in the Malayalam language, which is spoken in the south Indian state of Kerala. He was one of the triumvirate poets of modern Malayalam, along with Kumaran Asan and Ulloor S. Parameswara Iyer. The honorific Mahakavi (English: "great poet") was applied to him in 1913 after the publication of his Mahakavya Chitrayogam. He was a nationalist poet and wrote a series of poems on various aspects of the Indian freedom movement. He also wrote against caste restriction, tyrannies and orthodoxies. He founded the Kerala Kalamandalam and is credited with revitalising the traditional Keralite dance form known as Kathakali.

Poetry
He started writing poems from the age of twelve. Kiratha Satakam and Vyasavataram were his earliest published works. He won Bhashaposhini magazine's poetry award in 1894. His poems began appearing in Bhashaposhini, Kerala Sanchari and Vijnana Chintamani magazines. His first major literary ventures was a rendition of Valmiki's Ramayana into Malayalam, the work of which started in 1905 and took two years to complete. Unlike some of his contemporaries, Vallathol did not have any acquaintance with English language. He earned the title Mahakavi after the publication of the Mahakavya Chitrayogam in 1913. Chitrayogam conformed to all the principles of a traditional Mahakavya and was divided into 18 Sargas. The story of Chandrasena and Taravali, taken from Kathasaritsagara, was the theme of this poetry work. Vallathol portrayed the protest of Parvati against Siva in the work Gangapati (1913) and of Usha defying her father for the sake of her love in Bandhanasthanaya Anirudhan (1914). In 1917, the first of his eleven-volume work Sahitya Manjari (A Bouquet of Literature) was published. These volumes, published from 1917 to 1970, contain his collected short romantic poems dealing with a variety of themes. Many of these poems earlier appeared in P. V. Krishna Variar's Kavanakaumudi magazine. His khanda kavya on Mary Magdalene titled Magdalana Mariam paved the way for a new tradition in of Christian symbolism in Malayalam. The poet's own struggle with deafness from his early twenties features in the work Badhiravilapam. Other celebrated short poems of Vallathol include Sishyanum Makanum, Virasinkala, Achanum Makalum, Divaswapnam and Ente Gurukulam.

In addition to subjects from nature and the lives of ordinary people, Vallathol's opposition to the indignities of the caste system and the injustices suffered by the poor form the themes of many of his poems. He is also regarded as the greatest nationalist poet of the language. He was one of the triumvirate poets of modern Malayalam, along with Kumaran Asan and Ulloor S. Parameswara Iyer. Literary critic K. M. George has noted that, together with Kumaran Asan, Vallathol was "responsible for bringing about a revolutionary change in Malayalam poetry in the [nineteen]-twenties. Asan concentrated on social themes and Vallathol championed the national movement; yet both made very significant contributions to the khandkavya, ie: the short poem of the lyrical type."

Kathakali
Vallathol is credited with revitalising the traditional Keralite dance form known as Kathakali. He played a prominent role in setting up the Kerala Kalamandalam at Cheruthuruthy, near the banks of Bharathapuzha River. The revival of the art of Kathakali in modern Kerala was mainly due to the efforts of Vallathol and the Kerala Kalamandalam. He stimulated the world's interest in this art during his tours abroad between 1950 and 1953.

Involvement in Nationalist movement
Vallathol is regarded as the greatest nationalist poet of the language. He actively participated in the Nationalist movement. He attended the all India Conferences of the Indian Congress in 1922 and 1927 and rejected a royal honour bestowed upon him by the Prince of Wales during his India visit in 1922. Vallathol remained a great admirer of Mahatma Gandhi and wrote the poem "Ente Gurunathan" ("My Great Teacher") in his praise. At the same time, he felt attracted by the Communist ideology and wrote poems praising the achievements of the Soviet Union. He wrote several patriotic poems hailing India's nationalist movement.