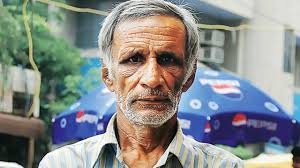 Ramashankar Yadav | रमाशंकर यादव 'विद्रोही' (3 December 1957 – 8 December 2015), also known as Vidrohi, was an Indian poet and social activist who went to Jawaharlal Nehru University (JNU) as a student but continued to live on or around its campus well beyond his student life.

Always present during student protests, reciting his revolutionary poetry at such occasions, and otherwise at Ganga Dhaba, was a common sight. He died participating in a student protest in Delhi. He was a progressive poet with reformative spirit. He tried to sensitise the society at large against religious superstition, gender discrimination and economical inequality in society through his poems. He was vocal against state repression, persecution of marginalised section of society and crackdown on voice of dissenting opinion. A documentary Main tumhara Kavi Hoon has been published on his life and work on 20 September 2015, almost three months before his death.He did not seek money, fame or power. He did not even write down his poems. He just recited them. Whatever work of his we see in written form is the result of the efforts of his admirers