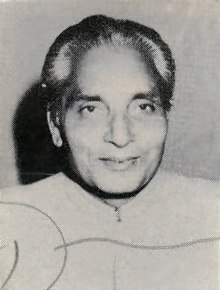 Purushottama Lal (28 August 1929 – 3 November 2010), commonly known as P. Lal, was an Indian poet, essayist, translator, professor and publisher. He was the founder of the publishing firm Writers Workshop in Calcutta, established in 1958.
Born in Kapurthala in the state of Punjab, Lal studied English at St Xavier's College, and later at the University of Calcutta. He would later teach at St. Xavier's College for over forty years. A friend of Fr Robert Antoine, he had himself aspired to be a Jesuit when young, and that haunted his entire oeuvre and life. This is eerily similar to so many other intellectuals and creative persons, like James Joyce.
P. Lal was an honorary Professor of English at St. Xavier's College, Calcutta. He was Special Professor of Indian Studies at Hofstra University from 1962 to 1963, and has since held Visiting Professorships at many colleges and universities throughout America. These included (apart from Hofstra University), University of Illinois, Albion College, Ohio University, Hartwick College, Berea College, and Western Maryland College.
He married Shyamasree Devi in 1955, and had a son, Ananda Lal, and a daughter, Srimati Lal.