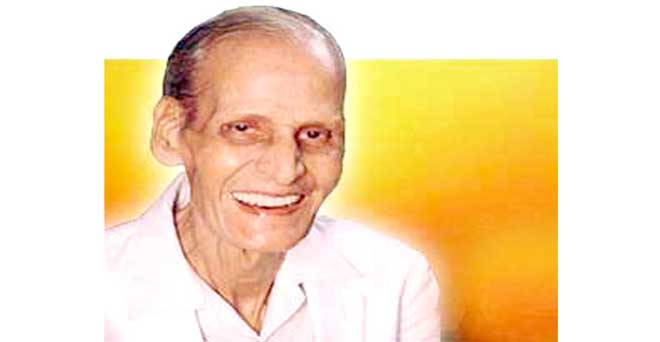 Kavi Pradeep (6 February 1915 – 11 December 1998), born Ramchandra Narayanji Dwivedi,[1] was an Indian poet and songwriter who is best known for his patriotic song Aye Mere Watan Ke Logo written as a tribute to the soldiers who had died defending the country during the Sino-Indian War.
His first recognition came for his patriotic lyrics for the film Bandhan (1940). His status as a nationalistic writer got immortalised for writing a daringly patriotic song Door Hato Ae Duniya Walo (Move Away O Outsiders) in India's first golden jubilee hit Kismet (1943) because he was forced to go underground to avoid arrest immediately after the film's release that invited the ire of British government.[2]
In a career span of five decades, Kavi Pradeep wrote about 1,700 songs[1] and nationalistic poems including the lyrics for some 72 films, including hits like Chal Chal Re Naujawan in film Bandhan (1940) and Aao Bachcho Tumhein Dikhayen and De Dee Hame Azaadi Bina Khadag Bina Dhaal in film Jagriti (1954)[3] In 1958, HMV, released an album of 13 songs with his lyrics. He was made the Rashtrakavi, (Poet Laureate), and came to be known as, Kavi Pradeep
In 1997, he was honoured by India's highest award in Cinema, the Dada Saheb Phalke Award for Lifetime Achievement.
Kavi Pradeep was born Ramchandra Narayanji Dwivedi in 1915 into a middle-class Audichya Brahmin family in the small central Indian town of Badnagar near Ujjain. Since his early student days and later while pursuing graduation from University of Lucknow, he had a passion for writing and rendering Hindi poetry. He hypnotised the audience at kavi sammelans (poet's gatherings) with his inimitable style. It was during this time he adopted the pen name ("nom de plume") Pradeep. After graduating from Lucknow University in 1939, he decided to join a teacher's course to become a teacher.