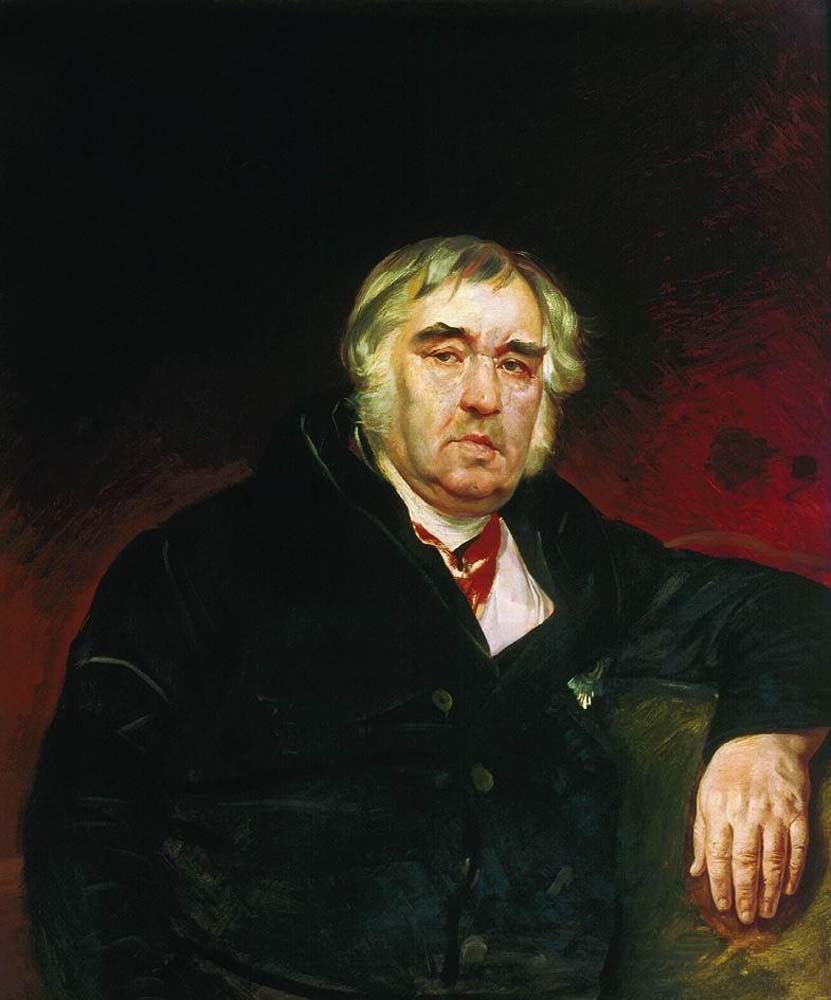 Ivan Andreyevich Krylov (Russian: Ива́н Андре́евич Крыло́в; February 13, 1769 – November 21, 1844) is Russia's best-known fabulist and probably the most epigrammatic of all Russian authors. Formerly a dramatist and journalist, he only discovered his true genre at the age of 40. While many of his earlier fables were loosely based on Aesop's and La Fontaine's, later fables were original work, often with a satirical bent.
Ivan Krylov was born in Moscow, but spent his early years in Orenburg and Tver. His father, a distinguished military officer, resigned in 1775 and died in 1779, leaving the family destitute. A few years later Krylov and his mother moved to St. Petersburg in the hope of securing a government pension. There, Krylov obtained a position in the civil service, but gave it up after his mother's death in 1788. His literary career began in 1783, when he sold to a publisher the comedy “The coffee-grounds fortune teller” (Kofeynitsa) that he had written at 14, although in the end it was never published or produced. Receiving a sixty ruble fee, he exchanged it for the works of Molière, Racine, and Boileau and it was probably under their influence that he wrote his other plays, of which his Philomela (written in 1786) was not published until 1795.
Beginning in 1789, Krylov also made three attempts to start a literary magazine, although none achieved a large circulation or lasted more than a year. Despite this lack of success, their satire and the humour of his comedies helped the author gain recognition in literary circles. For about four years (1797–1801) Krylov lived at the country estate of Prince Sergey Galitzine, and when the prince was appointed military governor of Livonia, he accompanied him as a secretary and tutor to his children, resigning his position in 1803. Little is known of him in the years immediately after, other than the commonly accepted myth that he wandered from town to town playing cards. By 1806 he had arrived in Moscow, where he showed the poet and fabulist Ivan Dmitriev his translation of two of Jean de La Fontaine's Fables, “The Oak and the Reed” and “The Choosy Bride”, and was encouraged by him to write more. Soon, however, he moved on to St Petersburg and returned to play writing with more success, particularly with the productions of “The Fashion Shop” (Modnaya lavka) and “A Lesson For the Daughters” (Urok dochkam). These satirised the nobility's attraction to everything French, a fashion he detested all his life.
Krylov's first collection of fables, 23 in number, appeared in 1809 and met with such an enthusiastic reception that thereafter he abandoned drama for fable-writing. By the end of his career he had completed some 200, constantly revising them with each new edition. From 1812 to 1841 he was employed by the Imperial Public Library, first as an assistant, and then as head of the Russian Books Department, a not very demanding position that left him plenty of time to write. Honours were now showered on him in recognition of his growing reputation: the Russian Academy of Sciences admitted him as a member in 1811, and bestowed on him its gold medal in 1823; in 1838 a great festival was held in his honour under imperial sanction, and the Emperor Nicholas, with whom he was on friendly terms, granted him a generous pension.
After 1830 he wrote little and led an increasingly sedentary life. A multitude of half-legendary stories were told about his laziness, his gluttony and the squalor in which he lived, as well as his witty repartee. Towards the end of his life Krylov suffered two cerebral hemorrhages and was taken by the Empress to recover at Pavlovsk Palace. After his death in 1844, he was buried beside his friend and fellow librarian Nikolay Gnedich in the Tikhvin Cemetery.[2]