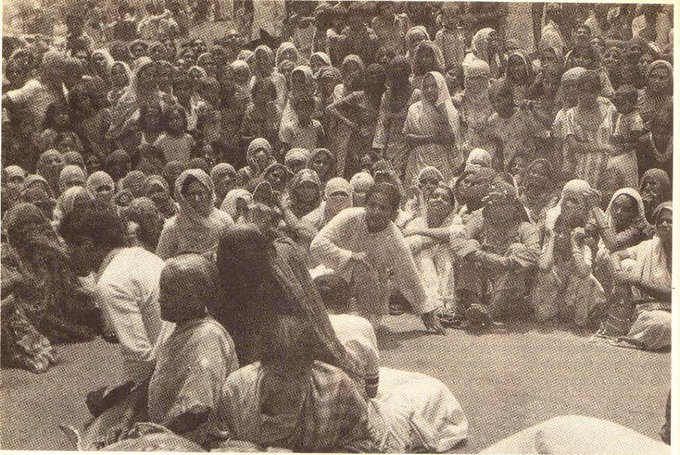 Swarnakumari Devi: A Forgotten Name In Bengali Poetry and Literature

Devi, Swarna Kumari (1855-1932) poet, playwright, lyricist, journalist, social worker, was born into the illustrious Tagore family of Jorasanko, being Debendranath's 10th child and sister of rabindranath tagore. She was educated at home according to the custom of the day and was married at the age of 12 to Janakiram Ghosal, a deputy magistrate. Her husband belonged to the progressive part of bhadralok society in Calcutta and encouraged his wife to discard purda and pursue writing and social work. Swarna Kumari had exhibited literary talent from an early age and was very much a part of the cultured milieu and literary activities at Jorasanko.'

SK Devi achieved fame as writer and editor of the well-known literary monthly bharati for 30 years. Her novel Dipnirban (1870) was widely acclaimed. Her other works include Chhinna Mukul (A Picked Bud), Snehalata or Palita (adopted girl) 1892-3, and perhaps her best work Kahake, 1898. The book was translated into English as The Unfinished Song. Swarna Kumari published in 1879 what might well be the first opera written in Bengal, Basanta Utsav.

Swarna Kumari often used forms that her more famous younger brother Rabindranath later picked up. In all she wrote 25 books in Bangla.

Active in the sphere of social reform and nationalist politics, Swarna Kumari helped form the Xakhi Samiti, an organisation to help widows and destitute women. In 1889 and 1890 along with Pandita Ramabai, Ramabai Ranade and kadambini ganguly she took part in the annual sessions of the indian national congress. She was one of the first two members elected from Bengal to represent that state at the session. In 1927 the university of calcutta awarded her the Jagattarini gold medal and in' 1929 she became the president of the Vangiya Sahitya Sammelan.

Sakhi Samiti (Society of Friends) was started by Swarnakumari in 1896. With her were associated other members of the Tagore family. The objective of the society was to assist helpless orphans and widows. The following report was published in Bharati and Balak in 1898:

"The first aim of the Samiti is to help helpless orphans and widows. This will be done in two ways. In those cases where such widows and orphans have no near relations or if those relations have not the means of maintaining them the Sakhi Samiti will take their full responsibility. In other cases the Samiti will give them help as far as possible. In the case of those women whose full responsibility the Samiti will take they will educate them and through them spread women’s education. After they have finished their education they will take up the work of zenana (female) education. The Samiti will give them remuneration for their work. In this way two objectives will be accomplished. Hindu widows will be able to earn through service to others according to sanction of Hindu religion."

As the subscriptions from members were not sufficient to run the organisation, an annual exhibition was held in Bethune College to raise funds. Apart from saris from Dhaka and Santipur and handicrafts from Krishnanagar and Birbhum, there used to be a large collection of handicrafts from outside Bengal – Kashmir, Moradabad, Varanasi, Agra, Jaipur and Mumbai.[19] Her objective was to display indigenous products and sell them. The fair created a sensation in her days.[1]

The activities of Sakhi Samaiti continued till around 1906 and thereafter taken over by Hiranmoyee Bidhaba Ashram. The widows’ home started by Sashipada Banerjee at Baranagore, considered the first such venture, inspired Hiranmoyee Devi, the daughter of Swarnakuamri, to start the Mahila Bidhaba Ashram (that was named after her subsequent to her death). Among the members of the executive committee of the Mahila Vidhaba Ashram in its inaugural year were: Swarnakumari, Maharani Sucharu Devi of Mayurbhanj, Maharani Suniti Devi of Cooch Behar (the two daughters of Keshub Chunder Sen), Lady Hamilton, Priyamvada Devi, Mrs. Chapman, Mrs. S.P. Sinha, and Hiranmoyee Devi, who served as secretary. ‘It is still running quite efficiently’ (in 1949) with Kalyani Mallick, the daughter of Hiranmoyee Devi guiding the affairs of the institution.[19]

The society was christened "Sakhi Samiti" by Rabindranath. At the request of Sarala Roy, Rabindranath wrote a dance drama Mayar Khela to be staged by Sakhi Samiti for fund raising.[

History of Feminist Movement in Indian

Theatre Although India’s theatrical history can be traced back to 1st century BCE, it lacks substantial female representation till the 19th century. A reason for this could be the systemic erasure of female voices from India’s cultural history. This has been perfectly captured by Tuntun Mukherjee, who writes: “The denial of education to women, the male exclusivity in the print culture, the tendency to ‘vulgarise’ and ‘devalue’ oral culture (generally the female domain), the separation of the private and public space have all served to confine women to certain genres and restrict or erase their presences in others”. In many theatre traditions, even female characters were played by male actors. The female writers and artists that did exist have been delegitimised as sex workers and singers from marginalised communities.

INDIAN FEMINIST THEATRE IS AN INTERSECTION OF ART AND ACTIVISM, AND POLITICAL AS WELL AS THEATRICAL MOVEMENTS.

Feminist ideology seeped into Indian theatre during the 1970s, when socially relevant narratives, including women’s issues, became popular among the masses. This doesn’t mean that there were no plays written by women or featuring female issues before the 1970s. The Wedding Tangle (1904) by Swarnakumari Devi, sister of Rabindranath Tagore, explored the agency of a woman within the context of larger issues such as class struggle and widow marriage. The play has intersectional themes, analysing that certain identities are more privileged than others.