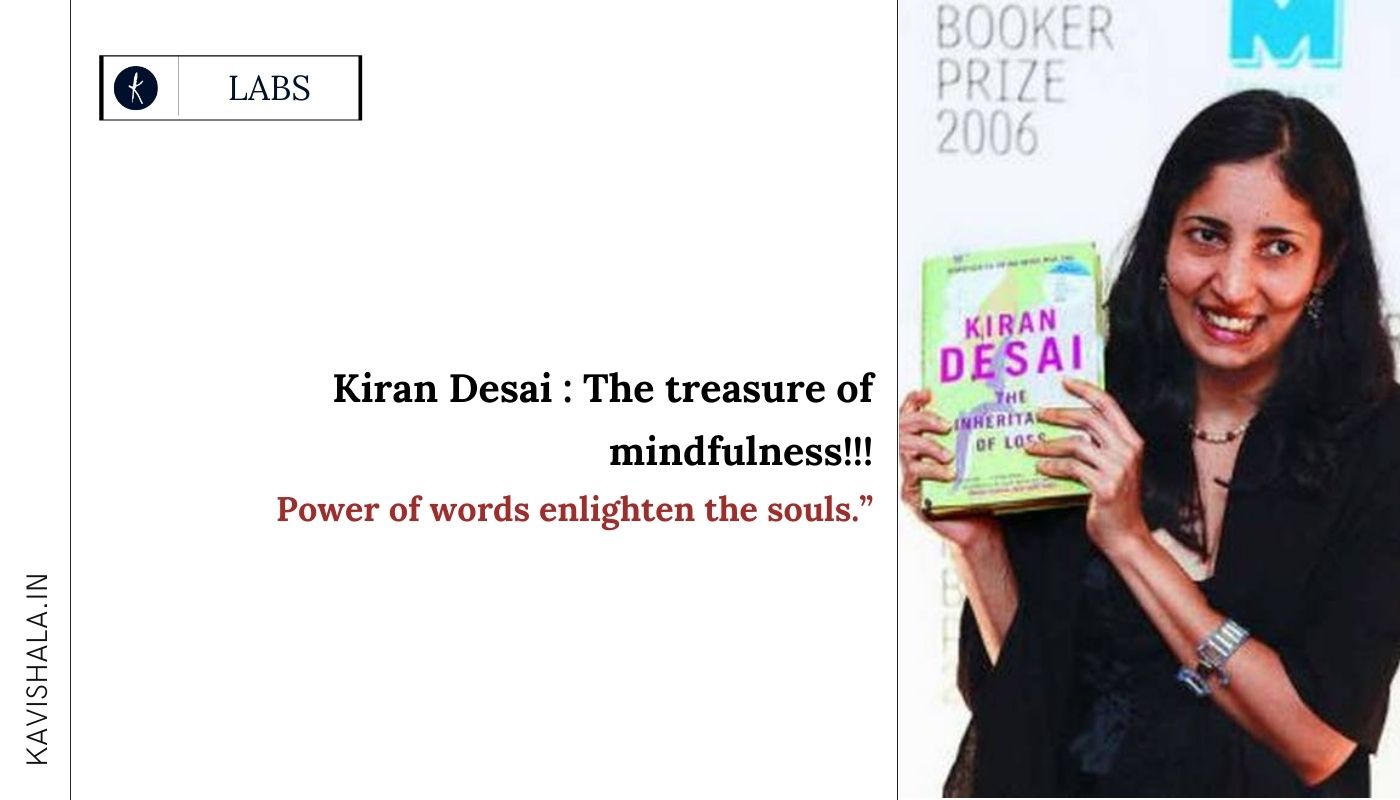 Kiran Desai : The treasure of mindfulness!

“Could fulfillment ever be felt as deeply as loss? Romantically she decided that love must surely reside in the gap between desire and fulfillment, in the lack, not the contentment. Love was the ache, the anticipation, the retreat, everything around it but the emotion itself.”

― Kiran Desai, The Inheritance of Loss

Kiran Desai an Indian author whose novel 'The Inheritance of Loss' won the 2006 Man Booker Prize and the National Book Critics Circle Fiction Award. Her first novel, 'Hullabaloo in the Guava Orchard', was published in 1998 and received accolades from the most notable figures of all times like Salman Rushdie. In 1971 Kiran Desai took birth in India and grew up there before migrating to England, at the age of 14 years. She received her education from India, England, and the US.

Her first novel, Hullabaloo in the Guava Orchard (1998) won a 1998 Betty Trask Award, and her second novel, The Inheritance of Loss (2006), set in the mid-1980s in a Himalayan village, won the 2006 Man Booker Prize for Fiction. The 2nd book of hers, 'The Inheritance of Loss', was widely praised by critics throughout Asia, Europe, and the US.

Having won the 2006 Man Booker Prize, as well as the 2006 National Book Critics Circle Fiction Award she was praised for her skillful writings and opinions in Literature. In May 2007 she was considered as a featured author at the inaugural Asia House Festival of Cold Literature. She was awarded a 2013 Berlin Prize Fellowship at the American Academy in Berlin.

“The present changes the past. Looking back you do not find what you left behind.”

― Kiran Desai, The Inheritance of Loss

In Jan 2015, she was among the 20 "most influential" global Indian women. Being an Indian author Kiran Desai is a citizen of India and a permanent resident of the US. She is the daughter of the prestigious Writer, Anita Desai.

Book Review "The Inheritance of Loss" :

The Inheritance of Loss is much more hilarious than Hullabaloo in its spatial and emotional depth including the verses that are explained more clearly. It reflects on huge subjects such as morality and justice, globalization, racial, social, and economic inequality, fundamentalism, and alienation. Although, it takes its reader on a journey to the see-saw of negative emotions. There is pathos - which often goes hand in hand with revulsion – for example in the description of the judge's adoration of his dog Mutt, the disappearance of which rocks his whole existence, set against his cruelty to his young wife.

There is frequent outrage at the deprivation and poverty in which many of the characters live, including the cook’s son in America; and there is humiliation, as it did in the treatment of Sai by her lover-turned-rebel, or Lola, who tries to stand up to the Nepalese bullies.

Desai's first novel, Hullabaloo in the Guava Orchard (1998), gained accolades from notable figures including Salman Rushdie and went on to receive the Betty Trask Award. Her second novel, The Inheritance of Loss (2006), won the 2006 Man Booker Prize and the National Book Critics Circle Fiction Award.

"Always be careful of what you hear about a woman.