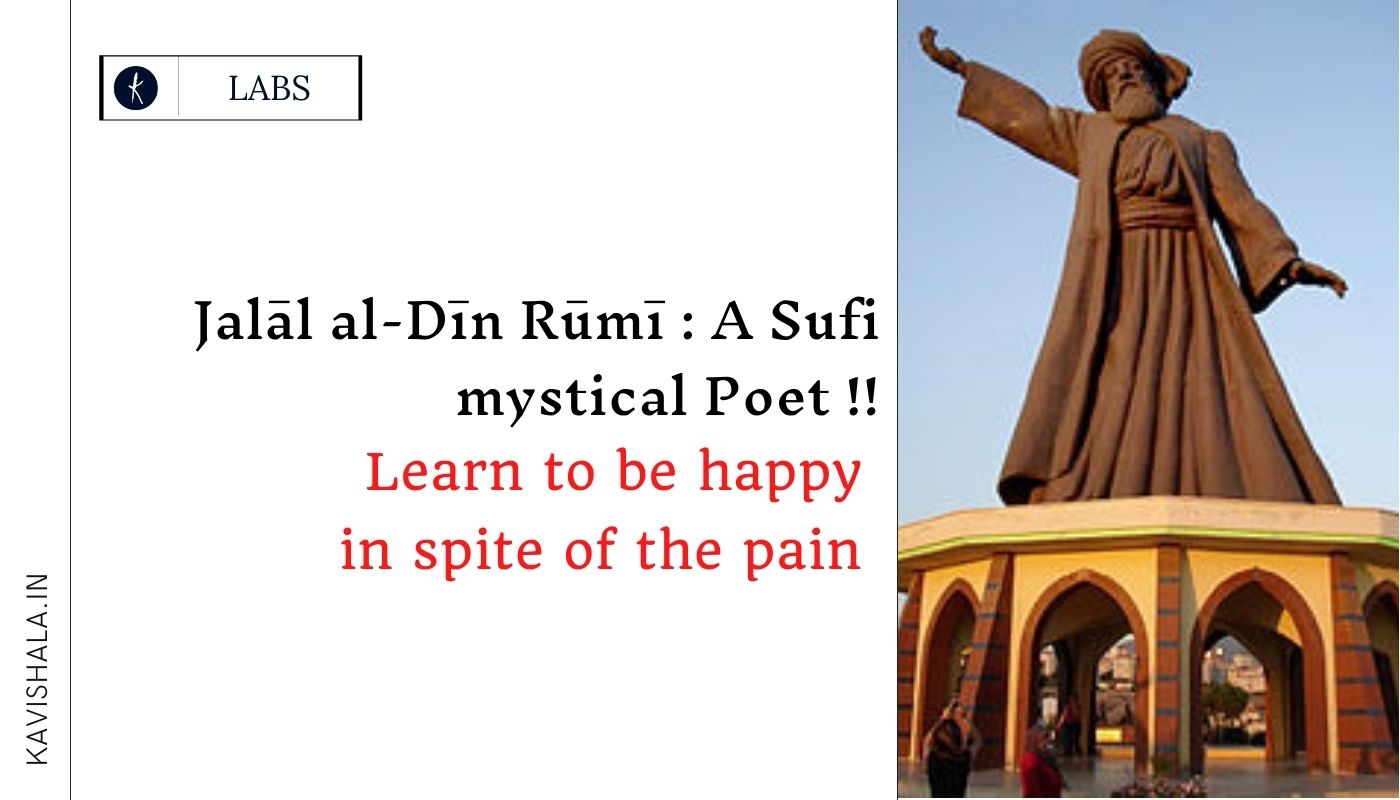 Rūmī, also known as Jalāl al-Dīn Rūmī, called by the honorific Mawlānā, was born on 30th of Sept. 1207 in Afghanistan. He was considered as one of the greatest Sufi mystics and poets in the Persian language, famous for his lyrics and for his didactic epic “Spiritual Couplets”, which widely influenced mystical thought and literature throughout the Muslim world. After his death, his disciples were organized in the Mawlawiyyah order.

Rūmī used Persian and Arabic in his poetry, in addition to some Turkish and less Greek, which has resulted in his being claimed variously for Turkish Literature and Persian Literature, that's why a reflection of the strength of his influence in Iran and Turkey is highly praised. However, the influence of his works in the Indian subcontinent is also substantial. Amidst the 20th century, he gained popularity on a global phenomenon, with his poetry achieving a wide circulation in western Europe and the US as well.

The influence of Shams al-Dīn

Let's see the most decisive moment in Rūmī’s life that merely took place on the 30th of Nov in 1244, in the streets of Konya where he met the wandering dervish holy man and the Sun of Tabriz religion, whom he first encountered in the state of Syria.

For many years the two mystics lived together, and Rūmī neglected his disciples and family so that his scandalized entourage forced Shams to leave the town in the month of Feb 1246. Jalāl al-Dīn was broken from inside, and his eldest son, Sulṭān Walad, eventually brought Shams back from Syria. The family, could not tolerate the close relation of Jalāl al-Dīn with his beloved, and one night in 1247 Shams vanished without telling anyone.

There was the method of kneeling,

a fine method, if you lived in a country

where stones were smooth.

Their prayers were weathered rib bones,

as if this shedding of syllables could somehow

fuse them to the sky.

There were the men who had been shepherds so long

Under the olive trees, they raised their arms—

Hear us! We have pain on earth!

We have so much pain there is no place to store it!

But the olives bobbed peacefully

in fragrant buckets of vinegar and thyme.

At night the men ate heartily, flatbread and white cheese,

and were happy in spite of the pain

because there was also happiness.

Some prized the pilgrimage,

wrapping themselves in new white linen

to ride buses across miles of vacant sand.

When they arrived at Mecca

they would circle the holy places,

on foot, many times,

they would bend to kiss the earth

While for certain cousins and grandmothers

lugging water from the spring

or balancing the baskets of grapes.

These were the ones present at births,

The ones stitching intricate needlework into children’s dresses,

There were those who didn’t care about praying.

The young ones. The ones who had been to America.

They told the old ones, you are wasting your time.

Time?—The old ones prayed for the young ones.

They prayed for Allah to mend their brains,

for the twig, the round moon,

to speak suddenly in a commanding tone.

And occasionally there would be one

who did none of this,

who beat everyone at dominoes,

and was famous for his laugh.