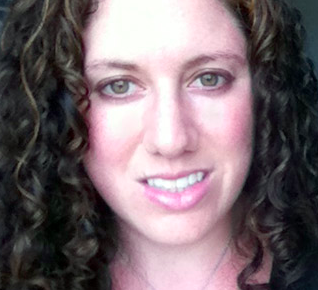 of his lawn chair once.

The poem in which we left the yellow plastic shovel behind and everyone is bereft.

past the rock jetty.

The poem in which everyone listens to celebrity gossip in the car on the way back.

The poem in which I pontificate on how ugly the fiancée of that Jonas brother is,

and how they're too young to get married, and how my grandmother's old

neighbor would have said, "Ugly? She can't help that she's ugly. It's that she's

so stupid," and I would have yelled at her for assuming that all former hair-

The poem in which I turn into my grandmother's old neighbor.

pendulous breasts, the moist tissues, the dipping into the cleavage to retrieve

from the menu despite her coupon for two medium 1-topping pizzas.

asks the guy behind the counter if he knows her good-for-nothing brother. She

has hair that looks like cats got at a skein of yarn, and a tattoo above her ankle

that's dark and unspecified. It's far enough above her ankle that it's nearly mid-

in the borderlands on the way to its actual destination.

because of fear and uncertainty.

mother and the way she hums out-of-season carols while doing kitchen tasks,

out of the way for the Christmas party.

am not Anne Frank while the baby is in the car with your mother.

bought anything so the baby can one day start a revolution.

and don't stop to help.

enemy trenches and I feel a deep longing for my childhood.

The poem in which I remember, for no apparent reason, the tornado instructions

the top floor of a mostly abandoned mall in Overland Park, Kansas. All that

Pizza, the carcass of Sears.

The poem in which the moon is a vehicle for content, and is far less than a perfect

The poem in which we are all in some kind of limbo.