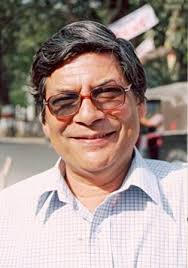 Viren Dangwal (5 August 1947 - 28 September 2015) was an Indian poet, academic, and journalist. He received several awards for his poetry.

Dangwal was born in 1947 in Kirti Nagar, Tehri Garhwal, Uttarakhand.

Dangwal was associated with the editorial board of the Hindi language newspaper Amar Ujala. He served as a professor of Hindi at Bareilly College from 1974 to 2010.

Dangwal died in Bareilly in September 2015