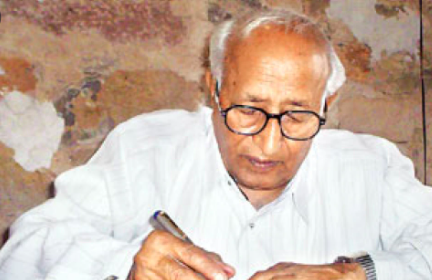 Vijaydan Detha (1 September 1926 – 10 November 2013), also known as Bijji, was a noted Indian writer of Rajasthani literature. He was a recipient of several awards including the Padma Shri and the Sahitya Akademi Award.
Detha has more than 800 short stories to his credit, which have been translated into English and other languages. With Komal Kothari, he founded Rupayan Sansthan, an institute that documents Rajasthani folklore, art, and music. His literary works include Bataan ri Phulwari (Garden of Tales), a 14-volume collection of stories that draws on folklore in the spoken dialects of Rajasthan. Many of his stories and novels have been adapted for the stage and the screen: adaptations include Mani Kaul's Duvidha (1973), Habib Tanvir and Shyam Benegal's Charandas Chor (1975), Prakash Jha's Parinati (1986), Amol Palekar's Paheli (2005), Pushpendra Singh's The Honour Keeper (2014), Dedipya Joshii's Kaanchli Life in a Slough (2020)