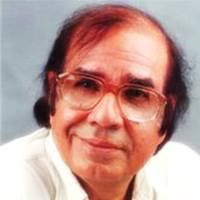 Sudarshan Kamra (1934 – 19 February 2008), better known by his takhallus Sudarshan Faakir, was an Indian poet and lyricist His ghazals and nazms were sung by Begum Akhtar and Jagjit Singh.

He studied MA in political science and English from DAV College, Jalandhar. Active in dramatics and poetry right from his college days, he directed Mohan Rakesh’s play "Ashadh Ka Ek Din" in his youth.

He lent his voice to AIR, Jalandhar before he left for Bombay where he later wrote for music directorJaidev. His song ‘Zindagi, zindagi, mere ghar aana zindagi' from Bhim Sen’s ‘Dooriyan’ as well as dialogues for the film ‘Yalgaar’ are popular till date. It is also claimed that the song, "Hum sab Bhartiya hain", which is sung at the NCC camps across the country, was penned by him.

Career
Faakir belonged to the small and diminishing tribe of non-Muslim Urdu poets from East Punjab. Sudarshan Faakir is the first lyricist to have won a Filmfare Award for his very first song. Apart from the hits like Woh Kagaz Ki Kashti, he was famous for a religious number - Hey Ram... Hey Ram. He is the Writer of National NCC Song of India- Hum Sab Bhartiya Hain. Apart from Non-Film Music, Sudarshan Faakir has Penned Songs from various films also.

Sudarshan ‘Faakir’ was the favourite poet of ‘Mallika-e-ghazal’ Begum Akhtar in her last phase, She sang five of his ghazals. He was also the co-traveller of Jagjit Singh, an association that began with ‘Woh kagaz ki kishti, woh barish ka pani’ in 1982.

A perfectionist to the core, he laboured hard over his poetry. Faakir is perhaps one of the last of the tribe of vanishing poets who lived for poetry and it is noteworthy that he put together his poetry in an anthology and published his first ‘diwan’ only after he became a much-celebrated poet.

Sudarshan died on 18 February 2008, at a hospital in Jalandhar, at the age of 73, after a prolonged illness. He was cremated at Model town.