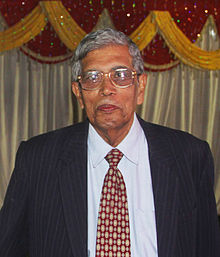 Sitakant Mahapatra (born 17 September 1937) is an eminent Indian poet and literary critic in Odia as well as English. He was in the Indian Administrative Service (IAS) since 1961 until retiring in 1995, and has held ex officio posts such as the Chairman of National Book Trust, New Delhi since then.

He has published over 15 poetry collection, 5 essay collections, a travelogue, over 30 contemplative works, apart from numerous translations. His poetry collection has been published in several Indian languages. His notable works are, Sabdar Akash (1971) (The Sky of Words), Samudra (1977) and Anek Sharat (1981).

He was awarded the 1974 Sahitya Akademi Award in Odia for his poetry collection, Sabdara Akasha (The Sky of Words). He was awarded the Jnanpith Award in 1993 "for outstanding contribution to Indian literature" and in its citation the Bharatiya Jnanpith noted, "Deeply steeped in western literature his pen has the rare rapturous fragrance of native soil"; he was also awarded the Padma Bhushan in 2002 and Padma Vibhushan in 2011 for literature apart from winning the Soviet Land Nehru Award, Kabeer Samman and several other prestigious awards.