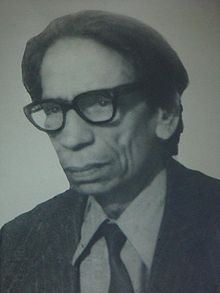 Poetry and India's freedom struggle
Shamim had a taste in poetry since he was a kid. He composed his first couplet at the age of eight. He now was aware what he was born for. He started writing and was adored all over Uttar Pradesh. This was the era when India was vehemently trying to get out of snare of British rule. Being an Indian he started writing poems that conveyed the moral of adhesion to one's own country. These poems became so influential that his popular revolutionary 'Nazms' and 'Naghmas' ('Geets') were sung in the 'Prabhat-Pheris' taken out on the streets of cities like Lucknow and Varanasi during the freedom struggle.

Soon Shamim Karhani's nationalist and revolutionary poetry started attracting the attention of both the common people and the literati. It was through this nationalist platform that he joined the Progressive Writers' Movement. In 1948 he composed a poem entitled Jagao Na Bapu Ko Neend Aa Gayi Hai just after the assassination of Mahatma Gandhi. The above poem had such an emotional appeal that it spread like the jungle fire. Once, Shamim Karhani had the opportunity to recite the poem in the presence of Pandit Jawaharlal Nehru, the first Prime Minister of India. Nehru, after listening to the poem, got impressed by Shamim's work and asked him to come to Lucknow to recite his poems in Congress election meetings. Later, after independence, Nehru asked Shamim to come to Delhi. He migrated to Delhi in 1950 and met Nehru at 'Teen-Murti'. Nehru asked him to compose an epic in Urdu on the freedom movement of India and started giving him a stipend for the job from his personal pocket. On 7 February 1950 he wrote in Shamim's diary:

"A poet should make his life itself a poem. Shamim Karhani has sung of India's freedom. I hope he will continue to do so and enjoy this freedom"

His collection entitled "Roshan Andhera" was entirely devoted to the "Quit India Movement".

Shamim Karhani was a contemporary of eminent poets like Faiz Ahmed 'Faiz', Ali 'Sardar' Jafri, 'Majaz Lucknawi', Moin Ahsan 'Jazbi', Ali 'Jawad' Zaidi, etc. Being basically a 'Ghazal-go' (one who composes 'Ghazals'), however, tried his hand on each and every 'genre' of Urdu poetry and some of his compositions found eternal place in Urdu literature. He has composed (apart from ghazals) poems, 'rubaees', 'qataat', 'geet', elegies, 'marsiyas', 'eulogies' etc.