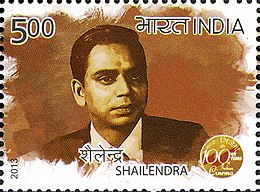 शैलेन्द्र | Shailendra (30 August 1923 – 14 December 1966) was a popular Indian Hindi-Urdu lyricist. Noted for his association with the filmmaker Raj Kapoor, singer Mukesh, and the composers Shankar-Jaikishan, he wrote lyrics for several successful Hindi film songs in the 1950s and the 1960s.
He came in contact with poet Indra Bahadur Khare at the Kishori Raman School. Both started composing poems, sitting on the rock located on the bank of a pond in between railway 27 quarters and railway line near to Mathura station. Afterwards Shailendra moved to Bombay for films and Indra Bahadur Khare got fame in Raashtreey Kavita.
In 1961 Shailendra invested heavily in the production of the movie Teesri Kasam (1966), directed by Basu Bhattacharya and starring Raj Kapoor and Waheeda Rehman. The film won the National Film Award for Best Feature Film. However, the film was a commercial failure. The falling health resulting from tensions associated with film production and anxiety due to financial loss, coupled with alcohol abuse, ultimately led to his early death.