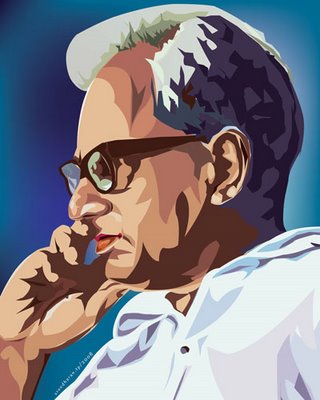 G. Sankara Kurup, (3 June 1901 – 2 February 1978) better known as Mahakavi G (The Great Poet G), was an Indian poet, essayist and literary critic of Malayalam literature. Known as one of the greats of Malayalam poetry, he was the first recipient of the Jnanpith Award―the highest Indian literary honor. He served as a nominated member of the Rajya Sabha from 1968 to 1972 and received the Padma Bhushan, the third highest Indian civilian award, in 1967. He was also a recipient of Sahitya Akademi Award, Kerala Sahitya Akademi Award and Soviet Land Nehru Award.
Sankara Kurup was born on June 3, 1901 at Nayathode, a hamlet in the erstwhile Kingdom of Cochin (now in Ernakulam district of the south Indian state of Kerala) to Nellikkappilli Variyath Sankara Warrier and Vadakkani Marath Lakshmikutty Marasyar His early education was at the local schools in Nayathode and Perumbavoor after passing his 7th standard examination, he passed the Vernacular Higher Examination from a school in Muvattupuzha. Subsequently, he started his career as the headmaster of Kottamam Convent School when he was only 16 and during his tenure there, continued his studies to pass the Malayalam Pandit and Vidwan examinations. In 1927, he moved to Thiruvilluamala High School as the Malayalam Pandit and to Thrissur training school in 1927 as a teacher. In 1931, he joined Maharaja's College, Ernakulam as a lecturer where he stayed until his retirement from service as a professor in 1956 he aso served as a producer at the Thiruvananthapuram station of the All India Radio.
Sankara Kurup served Kerala Sahitya Akademi as its fourth president. n He was also the president of the Kerala Sasthra Sahithya Parishad and served as the chief editor of its official magazine; it was during his tenure that the magazine became a tri-monthly. He edited another magazine, too, titled Thilakam. In 1968, he was nominated as a member of the Rajya Sabha, the upper house of the Parliament of India.