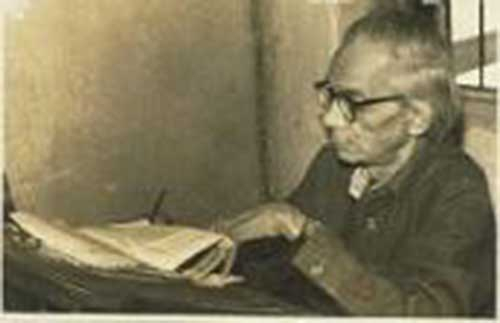 Samar Sen (Bengali: সমর সেন;)(10 October 1916 – 23 August 1987) was a prominent Bengali-speaking Indian poet and journalist in the post-Independence era.
Samar Sen, like his poetic contemporaries, grew up under the gigantic impact of Rabindranath Tagore. Yet Sen was perhaps the first to 'break' with the lyrical romanticism of Tagore and introduce "modern" concerns (disenchantment, decadence, avant-garde urban perspectives) into Bengali verse. Through his work, the influence of French and English modernism was first translated into Bengali verse; at the same time, the convergence of modernism and Marxism was evident early on in his poetic thought and style. His poetry was somewhat over-shadowed by his very original journalism, produced while he served as editor of the legendary Frontier. He was also known for his translations of Soviet literature; he spent nearly five years in Moscow working as a translator, although later in life he became doubtful about bureaucratic Communism.[3] Samar Sen also edited the radical journal Now, publishing a galaxy of prominent scholars and writers, including Joan Robinson and Satyajit Ray; his deputy editor was the playwright and actor Utpal Dutt. In his private life Sen was a man with a wry sense of humour, sometimes acerbic but often lethally accurate. He never regretted the sacrifice of what could have been a comfortable material life, supported by conventional measures of bourgeois success. His loyalty was always to the downtrodden. Some critics mourn his abandonment of poetry as a loss to Indian literature, reasoning that his acute perception and extraordinary command of languages would have continued to produce memorable verse of lasting significance. Sen decided, however, that poetry was a luxury in a world of gross deprivation and injustice and decided he would instead dedicate himself to agitating on behalf of the poor, regardless of the cost to himself. He remained committed to this cause for the rest of his life, despite experiencing significant poverty himself.