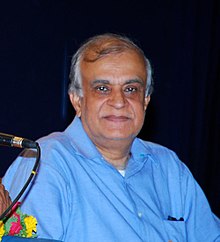 Rajiv Malhotra (born 15 September 1950) is an Indian-born American author who, after a career in the computer and telecom industries, took early retirement in 1995 to set up the Infinity Foundation, which focuses on Indic studies,[note 1] and also funds projects such as Columbia University's project to translate the Tibetan Buddhist Tengyur.
Apart from the foundation, Malhotra promotes a non-western view on Indic cultures, mainly Hinduism. Malhotra has written prolifically in opposition to the academic study of Indian culture and society originating in Europe and the United States, especially the study of Hinduism as it is conducted by scholars and university faculty of the West, which he maintains denigrates the tradition and undermines the interests of India "by encouraging the paradigms that oppose its unity and integrity".