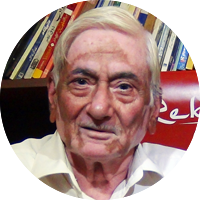 Rajendar Nath Rehbar (born 5 November 1931) is an Urdu Poet and Bollywood lyricist. He is the writer of the nazm Teri Khushboo Me Base Khat sung by ghazal singer Jagjit Singh. He is a disciple of the Urdu poet Ratan Pandoravi.

Literary career
Rajendar Nath Rehbar started written poetry in his childhood. He has been an active Urdu poet and writer. He has written several genres of Urdu literature like Ghazal and Nazm.

Rajindar Nath Rehbar has performed at more than 2000 shows and kavi sammelans over four decades. He has recited his poetry in many foreign countries. He has more than 300 disciples in all over the world Abhishek Kumar Ambar,Suresh Chand Shauq, Shyam Sundar Nanda Noor, Anu Jasrotia,Armaan Shahabi and Kusum Khushboo.

Books
Rajendar Nath Rehbar has written more than 10 books in different genres of Urdu literature. Some of his books include: