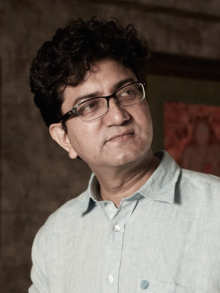 Prasoon Joshi (born 16 September 1971) is an Indian lyricist, screenwriter, poet, and marketer. He is the CEO of McCann World group India and Chairman APAC (Asia Pacific), a subsidiary of the global marketing firm McCann Erickson. He was appointed as the Chairperson of the Central Board of Film Certification on 11 August 2017.

Prasoon has received the Filmfare Best Lyricist Award three times, in 2007 and 2008 and again in 2014 for the Hindi movie Bhaag Milkha Bhaag. He has also received the National Film Award for Best Lyrics twice, for his work in Taare Zameen Par (2007), and Chittagong (2013).[1] He was awarded Padma Shri by the Government of India in 2015, for his contributions towards the field of Arts, Literature and Advertising.[2] He is one of the trustees of IGNCA, a member of Nehru Memorial Museum & Library Society Panel and is among the select 120 members of the National Committee for Commemoration of 150th Birth Anniversary of Mahatma Gandhi.

Global and national recognition
In 2008, he was invited as the Cannes Jury chairman and in 2009, he was named among the exclusive 10-member Cannes Titanium and Integrated Jury at the Cannes Lions International Advertising Festival. In 2006, he was chosen a 'Young Global Leader 2006' by the Forum of Young Global Leaders, an affiliate of the World Economic Forum, In 2007, he was asked to be a judge of the nationally popular reality singing competition Dhoom Macha De on NDTV Imagine. Joshi was part of the select three-member Core Creative Advisory Committee for the Commonwealth Games 2010 opening and closing ceremonies, with Shyam Benegal and Javed Akhtar.