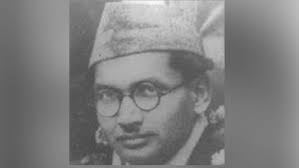 Manmath Nath Gupta (7 February 1908 – 26 October 2000) was an Indian revolutionary writer and author of autobiographical, historical and fictional books in Hindi, English and Bengali. He joined the Indian independence movement at the age of 13, and was an active member of the Hindustan Republican Association. He participated in the famous Kakori train robbery in 1925 and was imprisoned for 14 years. On release from jail in 1937, he started writing against the British government. He was sentenced again in 1939 and was released in 1946 just a year before India's independence in 1947. He has written several books on the history of the Indian struggle for independence from a revolutionary's point of view, including They Lived Dangerously – Reminiscences of a Revolutionary. He was also the editor of the Hindi literary magazine Aajkal.
Manmath Nath Gupta was born to Veereshvar Gupta on 7 February 1908 at Banaras in the state of United Province in British India. His grandfather Adya Prasad Gupta was an original resident of Hugli district in Bengal who had migrated from there in the year 1880 and settled in Uttar Pradesh at Banaras. Manmath got his early education in Viratnagar of Nepal where his father was posted as a school headmaster. Since his father got a job later in the Banaras, Manmath was admitted in Kashi Vidyapeeth for his further studies.
Manmath Nath Gupta joined the Indian nationalist movement as early as the age of 13 years. In 1921, he was distributing pamphlets in the Gadolia area of Benares calling for a boycott of the reception of the Edward, Prince of Wales by the Maharaja of Banares. When a police officer approached him, he stood his ground instead of running away. During the court proceedings, he told the judge, "I will not cooperate with you." He was jailed for three months.
He joined the Indian National Congress as a volunteer worker and went from village to village spreading the message of the Congress. He was dissatisfied with the slowness of the work and its inability in producing any short-term results. When Mahatma Gandhi called off the Non-cooperation movement after the incident at Chauri Chaura in 1922, Gupta was severely disappointed with the Congress and Gandhi.
The Kakori train robbery was the turning point in his life. On 9 August 1925, ten revolutionaries including Manmath Nath Gupta stopped a train near Kakori and looted the government treasury travelling in it. A passenger named Ahmed Ali was killed in this action by the bullet fired by Manmath. He was arrested along with all other revolutionaries and tried for this incident in the court, but being a teenager at that time, he was not sentenced to death. Instead, he was sentenced for 14 years' rigorous imprisonment. When he was released in 1937 he started writing against the British Government. He was again arrested in 1939 and imprisoned for life. He also spent some time in the Cellular Jail in Andaman.