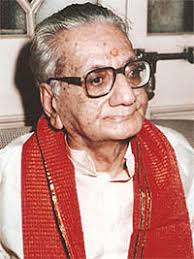 Kanhaiyalal Sethia (11 September 1919 – 11 November 2008) was a well-known Rajasthani and Hindi poet. He was born in Sujangarh, Churu District in the Indian state of Rajasthan. He was a passionate supporter of making Rajasthani, the mother tongue of the people of Rajasthan, at the union level. He was a government-recognized freedom fighter, social worker, reformer, philanthropist and environmentalist.

His first collection, Ramaniyai ra soratha, was written in the traditional style of didactic poetry rich in images and similes.

His book of poetic prose is Gala-gachiya.

Two of his Rajasthani poems are world famous and have attained cult status. "Dharti Dhoran Ri" is recognized as the anthem song of Rajasthan throughout the world. Internationally acclaimed film maker Gautam Ghosh has made a documentary based on this poem titled Land of the Sand Dunes which was awarded the Swarna Kamal (Golden Lotus) by the Government of India.

His other poems that are extremely well known are "Pathal 'R' Pithal" and "Kun Jameen Ro Dhani".

Kanhaiyalal's works have been translated in the following languages:

He was also a nationalist and a social activist.