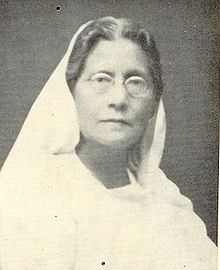 Kamini Roy (12 October 1864 – 27 September 1933) was a Bengali poet, social worker and feminist in British India. She was the first woman honours graduate in British India.
Born on 12 October 1864 in the village of Basunda, then in Bakerganj District of Bengal Presidency and now in Jhalokati District of Bangladesh, Roy joined Bethune School in 1883. One of the first girls to attend school in British India, she earned a Bachelor of Arts degree with Sanskrit honours from Bethune College of the University of Calcutta in 1886 and started teaching there in the same year. Kadambini Ganguly, one of the first two women honours graduates ever in the country, was three years senior to her in the same institution.

Nisith Chandra Sen, her brother, was a renowned barrister in the Calcutta High Court, and later the Mayor of Calcutta while her sister Jamini was the house physician of the then Nepal Royal family. In 1894 she married Kedarnath Roy.
Among her notable literary contributions were: