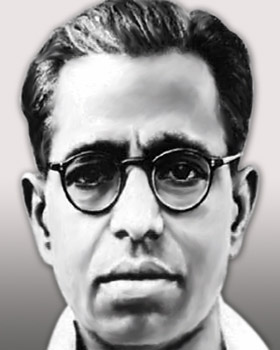 Ramaswamy Krishnamurthy (9 September 1899 – 5 December 1954), better known by his pen name Kalki, was an Indian writer, journalist, poet, critic and Indian independence activist. He was named after "Kalki", the tenth and last avatar of the Hindu God Vishnu. His writings include over 120 short stories, 10 novellas, 5 novels, 3 historical romances, editorial and political writings and hundreds of film and music reviews.

Critical work
Kalki was also a film and music critic who wrote under the pseudonym Karnatakam. He also penned many lyrics for many songs, most of which were adapted into Carnatic Music.

Honours
The release of a postage stamp in honour of Kalki was among the highlights of the centenary celebrations. Government of Tamil Nadu announced the nationalisation of Kalki's works, this will enable publishers to come out with reprints of his works.
Kalki Krishnamuthy received the Sangeetha Kalasikhamani award conferred on him by The Indian Fine Arts Society in 1953.
Death
Kalki died in Chennai on 5 December 1954 aged 55 years from tuberculosis. Kalki magazine's special issue dated 5 December 1954 (The day he died) for Annai Sarada Devi was his last editorial work. That magazine shared the information that his health was improving prior to his demise.