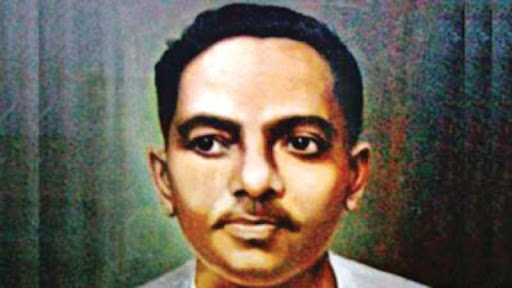 Jībanānanda Dāś (/dʒɪbɒnʌnɒndɔː dʌʃ/) (17 February 1899 – 22 October 1954) was an Indian poet, writer, novelist and essayist in the Bengali language. Popularly called "Rupashi Banglar Kabi'' (Poet of Beautiful Bengal), Das is the most read poet after Rabindranath Tagore and Kazi Nazrul Islam in Bangladesh and West Bengal. While not particularly recognised initially, today Das is acknowledged as one of the greatest poets in the Bengali language.
Born in Barishal to a Vaidya-Brahmo family, Das studied English literature at Presidency College, Kolkata and earned his MA from Calcutta University. He had a troubling career and suffered financial hardship throughout his life. He taught at many colleges but was never granted tenure. He settled in Kolkata after the partition of India. Das died on 22 October 1954, eight days after being hit by a tramcar. The witnesses said that though the tramcar whistled, he did not stop, and got struck. Some deem the accident as an attempt at suicide.
Jibanananda Das was very underrated poet in his time; he wrote profusely, but as he was a recluse and introvert, he did not publish most of his writings during his lifetime. Most of his work were hidden, and only seven volumes of his poems were published. After his death, it was discovered that apart from poems, Das wrote 21 novels and 108 short stories. His notable works include Ruposhi Bangla, Banalata Sen, Mahaprithibi, Shreshtha Kavita. Das's early poems exhibit the influence of Kazi Nazrul Islam, but in the latter half of the 20th century, Das's influence became one of the major catalysts in the making of Bengali poetry.
Das received Rabindra-Memorial Award for Banalata Sen in 1953 at All Bengal Rabindra Literature Convention. Das's Shrestha Kavita won the Sahitya Academy Award in 1955.