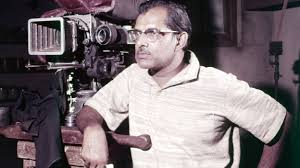 Hrishikesh Mukherjee (30 September 1922 – 27 August 2006) was an Indian film director, editor and writer regarded as one of the greatest filmmakers of Indian cinema, known for a number of films, including Anari, Satyakam, Chupke Chupke, Anupama, Anand, Abhimaan, Guddi, Gol Maal, Majhli Didi, Chaitali, Aashirwad, Bawarchi,Khubsoorat, Kissi Se Na Kehna, and Namak Haraam.
Popularly known as Hrishi-da, he directed 42 films during his career spanning over four decades, and is named the pioneer of the 'middle cinema' of India. Renowned for his social films that reflected the changing middle-class ethos, Mukherjee "carved a middle path between the extravagance of mainstream cinema and the stark realism of art cinema".
He also remained the chairman of the Central Board of Film Certification (CBFC) and of the National Film Development Corporation (NFDC). The Government of India honoured him with the Dada Saheb Phalke Award in 1999 and the Padma Vibhushan in 2001. He received the NTR National Award in 2001 and he also won eight Filmfare Awards.