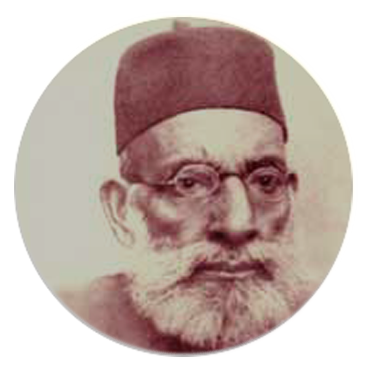 Syed Fazl-ul-Hasan (14 October 1875 – 13 May 1951), known by his pen-name Hasrat Mohani, was an Indian activist, freedom Fighter in the Indian independence movement and a noted poet of the Urdu language. He coined the notable slogan Inquilab Zindabad (translation of "Long live the revolution!") in 1921. Together with Swami Kumaranand, he is regarded as the first person to demand complete independence for India in 1921 at the Ahmedabad Session of the Indian National Congress.
Struggle for Indian independence
Mohani participated in the struggle for Indian Independence (end of British Raj); and was jailed in 1903 for many years by British authorities. At that time political prisoners were treated like common criminals and forced to do manual labor.

In 1904, he joined the Indian National Congress Party. He was the first person in Indian History who demanded 'Complete Independence' (Azadi-e-Kaamil) in 1921 as he presided over an annual session of All-India Muslim League. In December 1929, his campaign for 'complete independence' resulted in the shape of Indian National Congress session in Lahore.

Mohani opposed the partition of India. After complete independence from the British rule, Maulana Hasrat Mohani wanted a confederal set up on the pattern of Union of Soviet Socialist Republic (USSR). He wanted to see a confederal constitution in India after freedom from the British rule. His proposal had six federations: 1. East Pakistan; 2. West Pakistan; 3. Central India; 4. South-eastern India; 5. South-western India; and 6. Hyderabad Deccan.